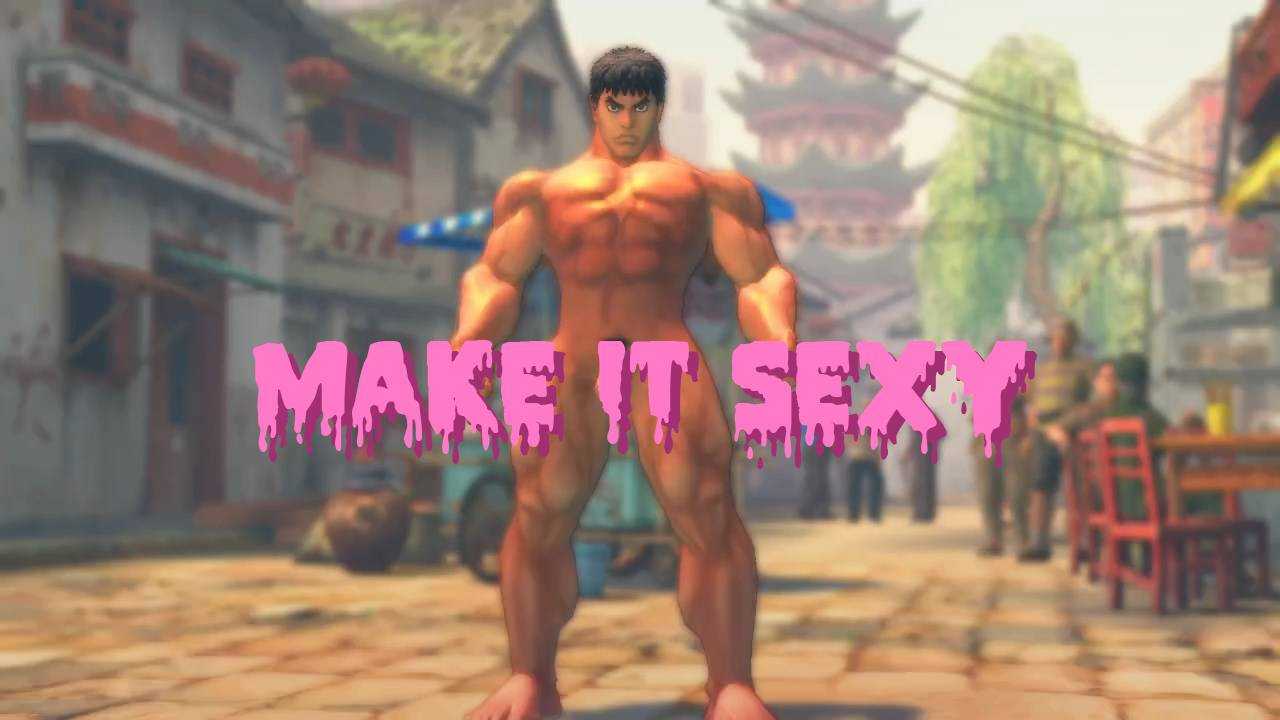 Street Fighter IV Is already undeniably sexy, in both the men and women department. It has in my opinion, the sexiest character model for Poison, plenty of big beefy dudes, and the best tomboys of the series. I spent dozens of hours grinding out ranked as Sakura back when this game was new. I wanted to be the best Sakura player on the planet. I never got there, but damn if I didn't try.

The first mod I installed was one of the easiest to find. the Nudemod Pack for All Girls by Segadordelinks on deviantart. Deviantart turned out to be the main location for SFIV mods that I was able to find, which was kind of surprising to me. But considering the timeline of when these mods would have been made, I guess it makes sense.

Decapre with her mask off. Oh, her tiddy out too.

There she is, the best girl, rocking that ripped bod.

Poison and Dan fighting it out.

It's always super easy to find nude mods for lady characters, but I always like to challenge myself by trying to track down nude mods for the men. Unfortunately the mod gods were not generous. I managed to find one nude mod for Ryu and his clones, but apparently they're all growers and not showers. The body models are pretty much identical. The mod is also made by Segadordelinks

Ryu definitely seems to me like the type of dude who would fight naked on accident and not even realize.

Chun Li Big Boobs Topless is the first mod I installed that changed the shape of the character models. This brings Chun's boob size up to about where it is in SFV.

She can arrest me anytime.

I don't have enough knowledge on the topic to tell you if the Poison Futa Mod is problematic or not. All I can say for certain is that if there was a futa mod for any other character I wouldn't have any qualms, but the fact that the only one that exists is for the only character in SF lore that is canonically trans, feels a little mean spirited to me. The terminology used in the mod name and description is definitely big yikes energy. That said, I can never resist a futa mod. And this one puts the Ryu clones' dicks to shame.

I REALLY wanted to install this mod, but alas the download link is dead. Actually, most of the mods I wanted to install had dead links. The modding scene for this game has fully moved on to V (which I plan to cover in the future, because it's an even HORNIER baseline than IV). I can't blame modders for moving on, but I wish they would store their work somewhere lasting for people like me.

I love how high quality the nude mods for the women in this game are, but I'm so dissappointed in the quality of the mods (that are still available) for the men. Where's zangief with a 3 foot long 8 inch diameter russian hammer? Where's Bison's glowing dong? Nowhere. I haven't looked into the SFV modding scene much, but with how insanely sexy the men in that game are, I'm hoping for better.