Being a DIK: Season 1

Everything about college, minus learning!

Being a DIK: Season 1 is a college 3d visual novel game developed and published by Dr PinkCake. Season 1 was released on Steam on Feb 13th 2020. It encompases the first 4 chapters of the Being a DIK story, with season 2 currently in development. 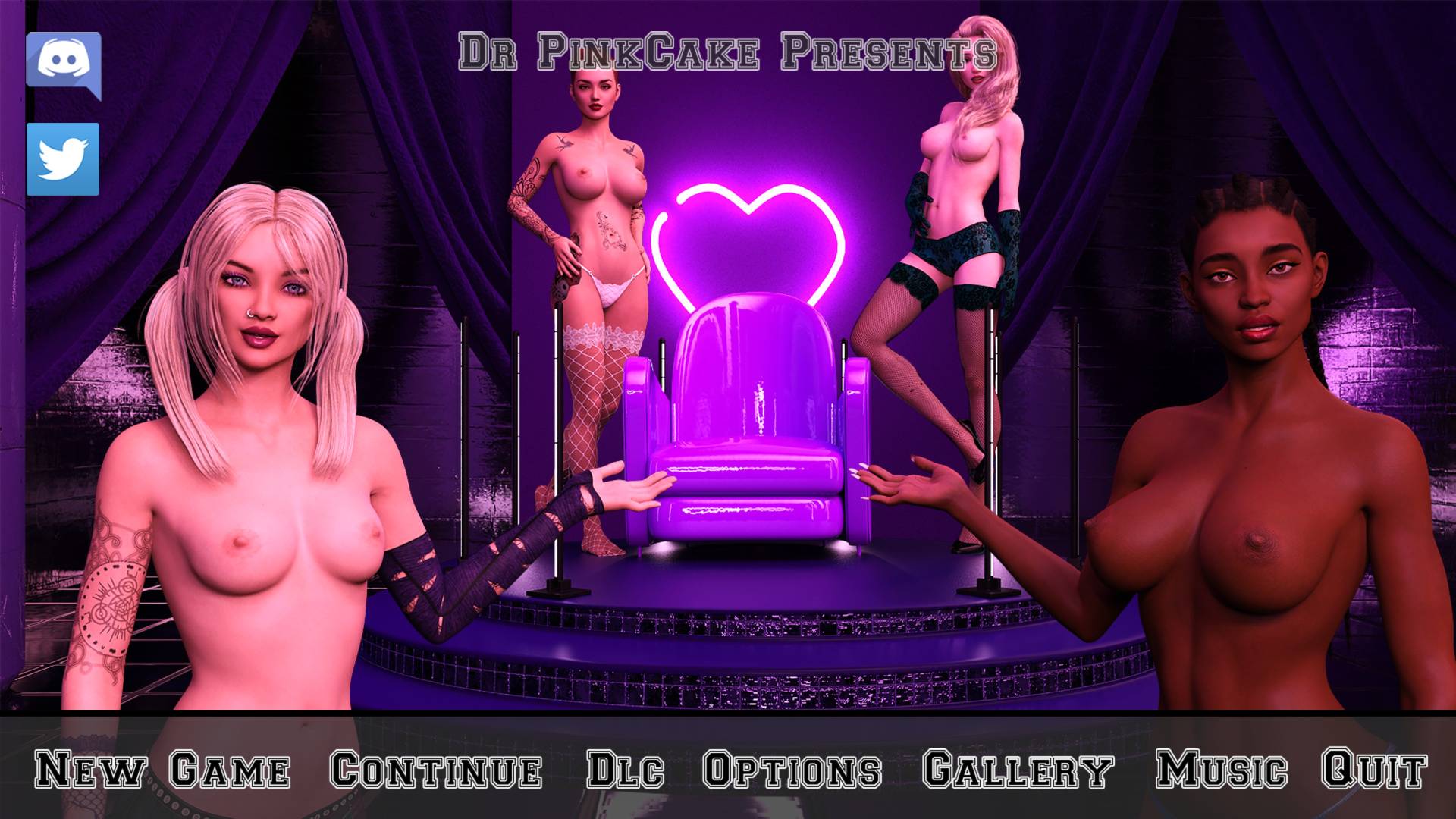 You are a bright young student who just got accepted into B&R college! You have to navigate classes, pledging a frat, and juggling multiple love interests! But you also have a girl back home to think about. Or do you? You don't really know, but you're doing the best you can! 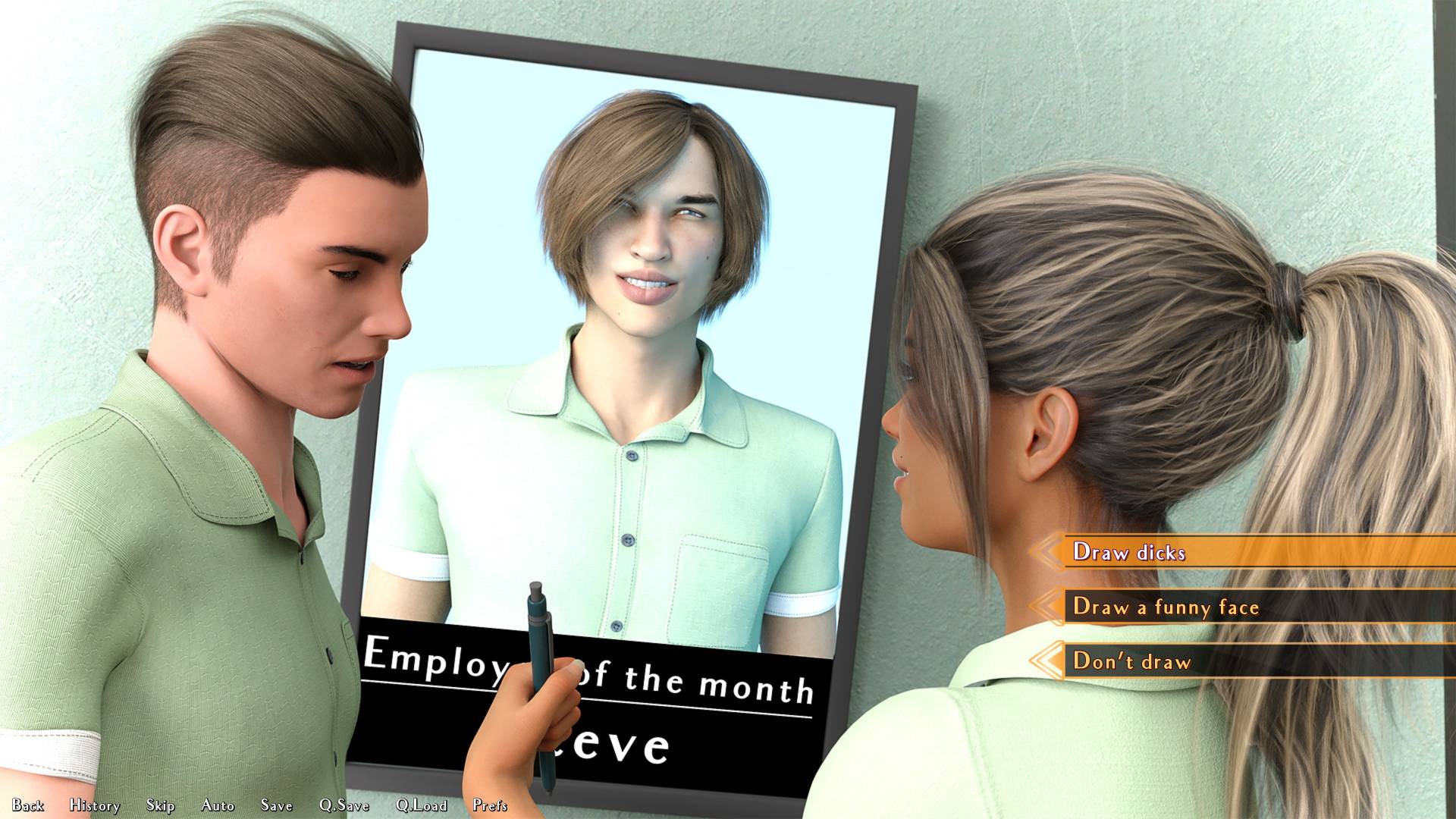 The choises you make in the game will affect your DIK score. If you act like an aggressive dude-bro, your meter shifts towards DIK. If you act like a generally compassionate person, it will move to CHICK. Where you are on that meter will affect the actions you can take. Some sexy scenes require certain ratings to unlock, and your personality will also control who is attracted to you. While I disagree that acting like a decent human is a feminine trait, I think the meter works very well in the context of the game. 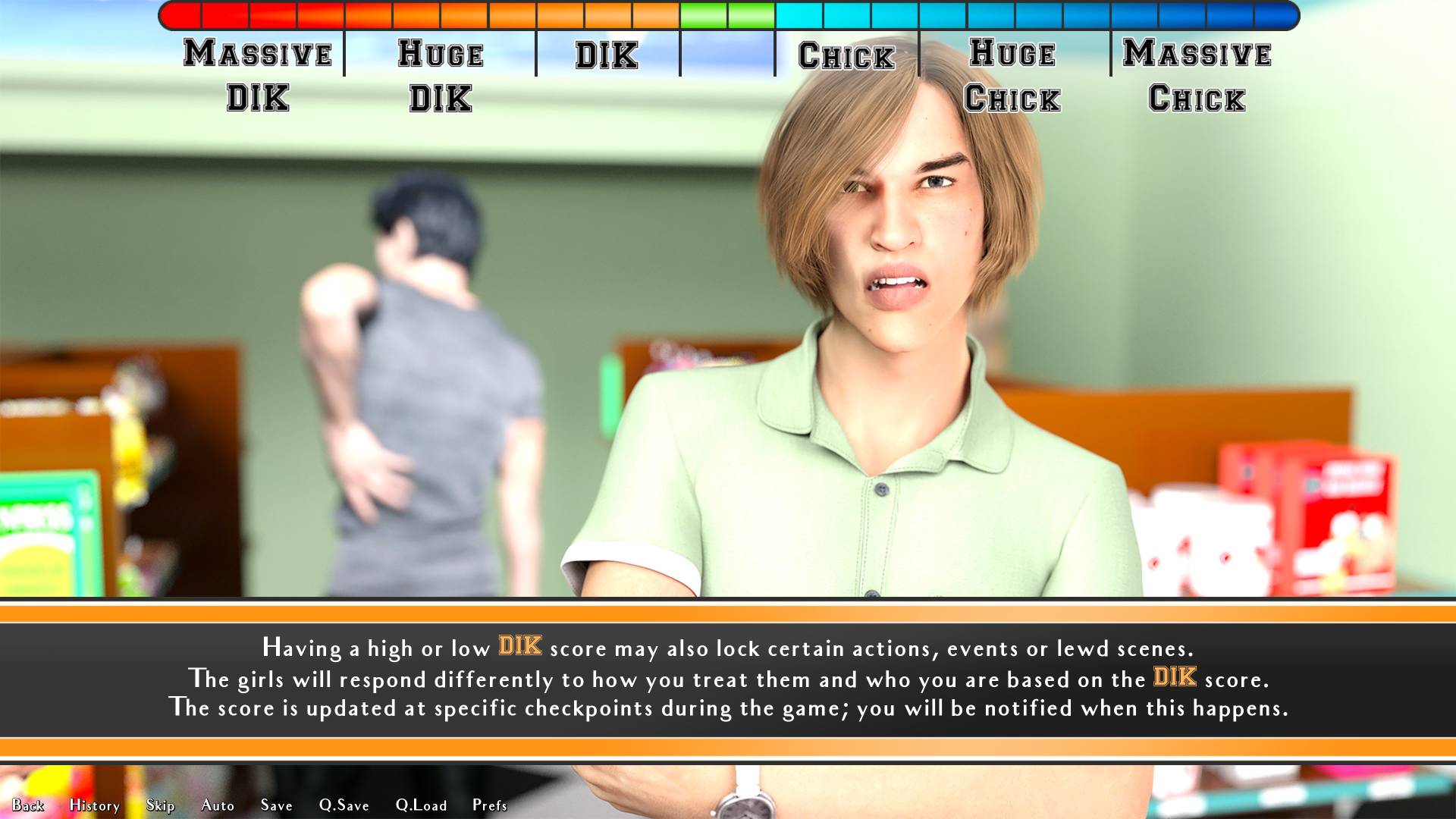 And that's really the theme for this whole review. With only a few exceptions, Being a DIK captures the toxic bro-culture of fraternities, but keeps it a level or two removed from reality so you can enact the fantasy without feeling too gross while doing it. The primary character that says really dumb shit, Derek, is canonically a big dumb idiot. But this game, like many others can't seem to avoid creating feminist straw-women for jerk characters to harass. 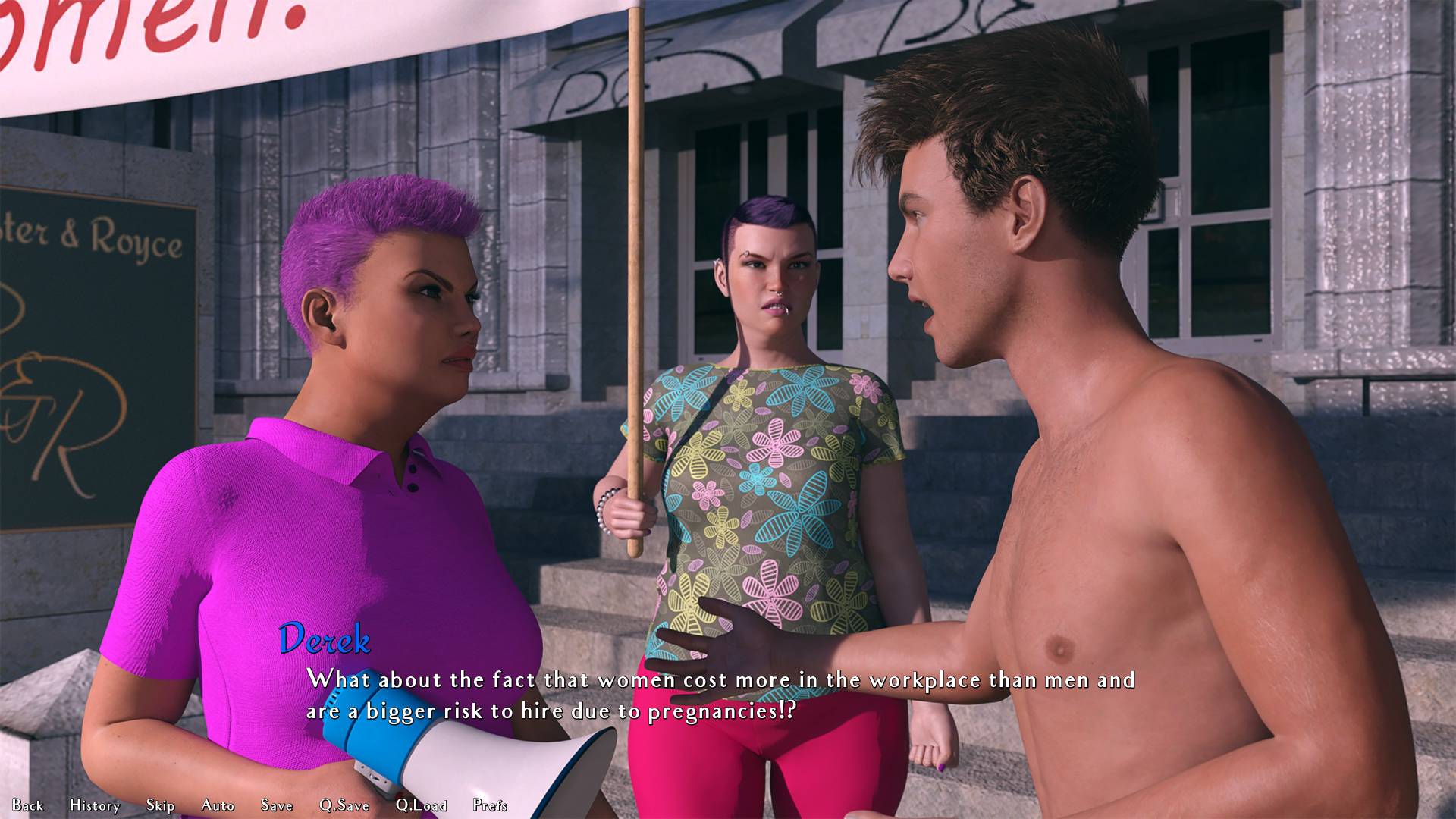 I was concerned at first because the game opens with a whole "are you easily offended" spiel, which usually means a game is going to be completely disgusting. However while Being a DIK has its fair share of gross out humor and sexualization, the warning right at the front is a great way to give people a warning. Given that warning I thought the content was going to be much darker than it was. I still feel like there's something big bubbling just under the surface.

Being a DIK is a visual novel (made in renpy) so it's mostly a reading experience. The dialogue was over the top, but fit perfectly in the mood of the game. To break up the dialogue, there are several minigames to play. These can give you money and unlock renders. Fighting and Slide puzzles can be done every free-roam, while others are only triggered by story events. Did I say fighting? Yes! There are parts throughout the story where you have to input specific arrow keys to win fights, but you're also a great martial artist, and can fight for fun and profit whenever you want. 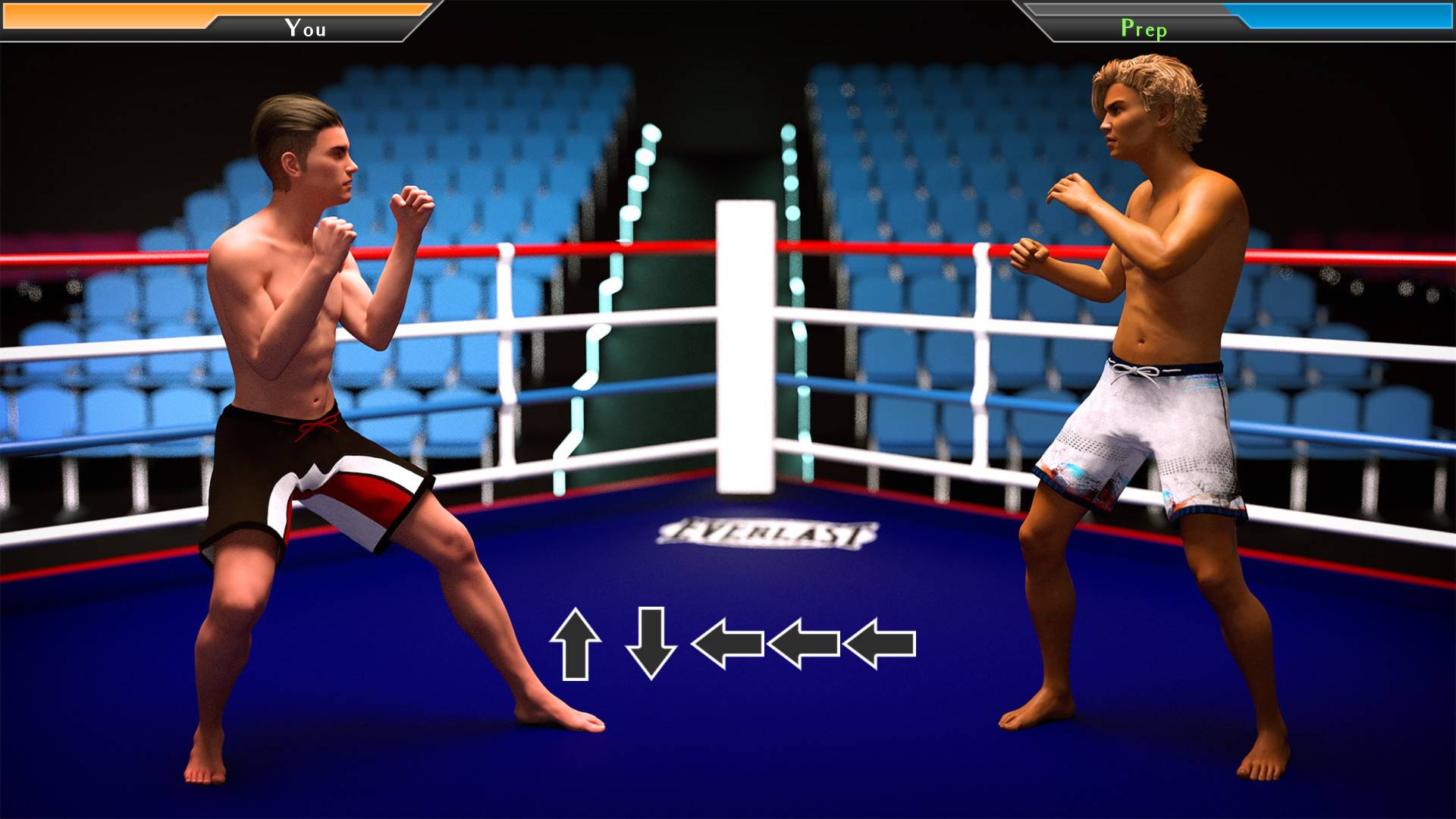 You can turn off mini-games at the beginning if you want to focus on the story, but that means there will be sexy scenes you might miss out on. I thought most of the games were pretty fun. I wouldn't play any of them on their own. The exception I have for this is the tennis minigame. There seems to be an element of randomness in there that I didn't like. I would hit the target perfectly but sometimes Jill (the rich girl) would still score on me. (In a bad way). 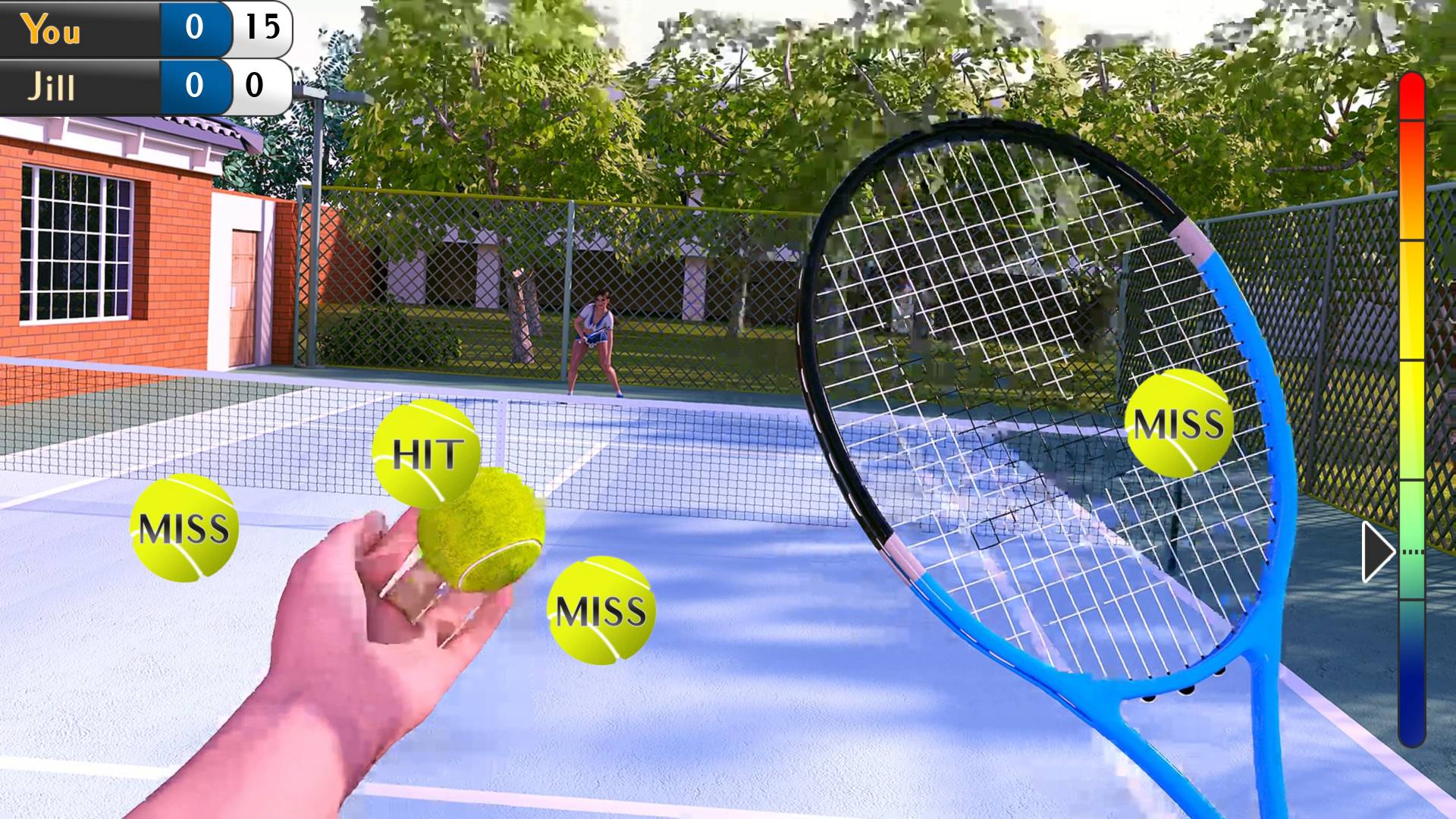 And while the drinking mini game is easy, I wouldn't recommend it while being on a bunch of edibles, because it actually became impossible. 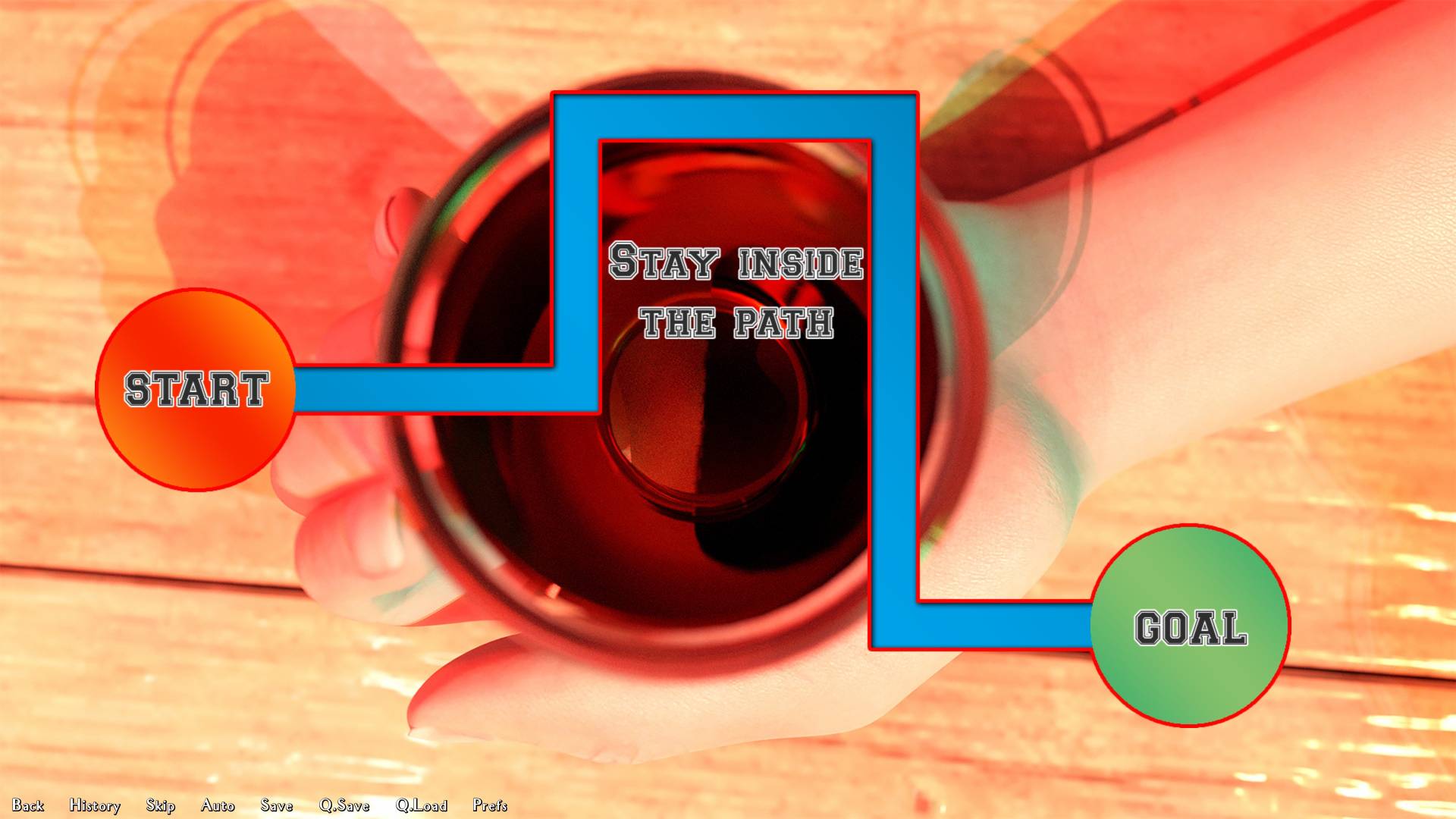 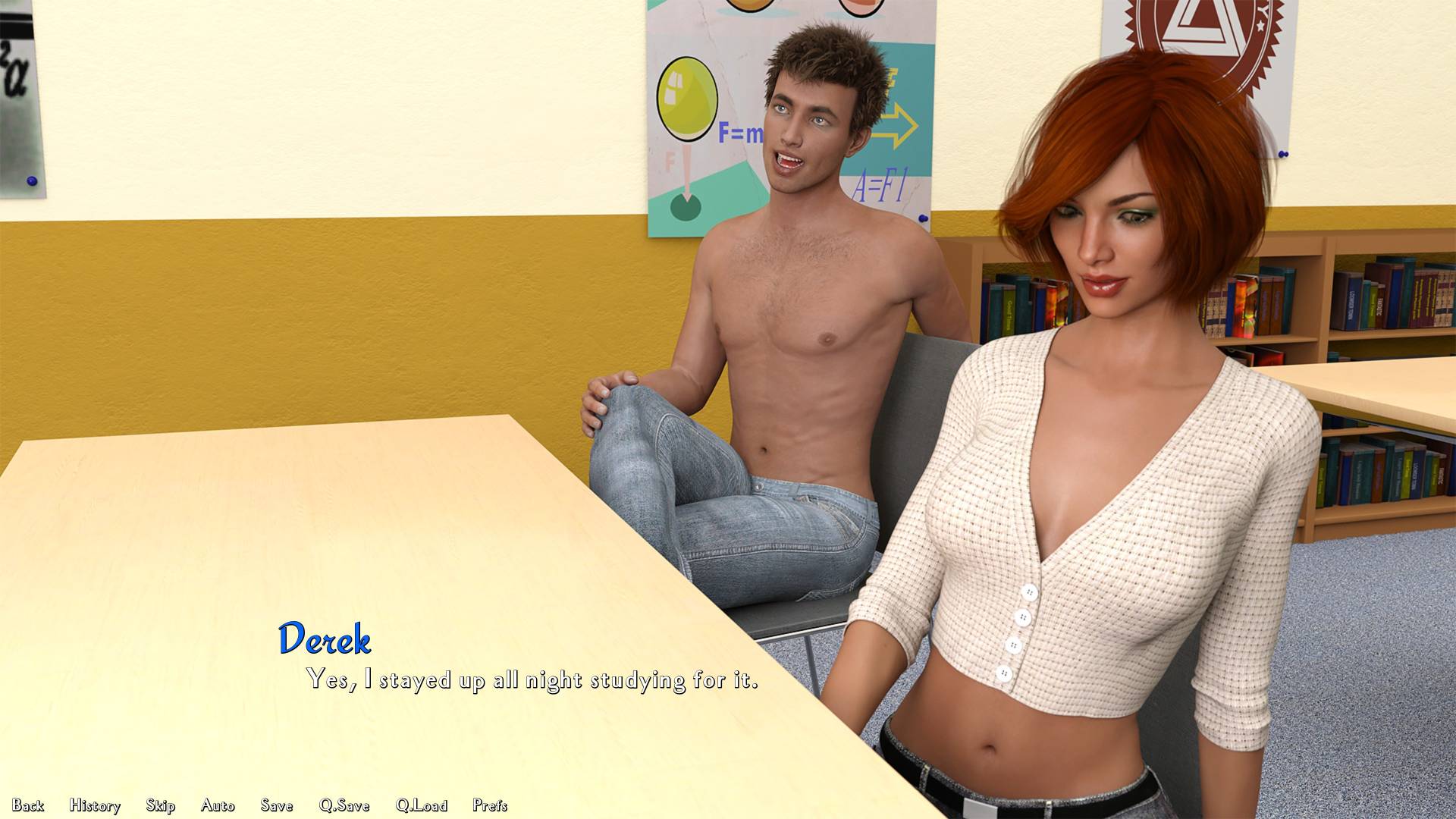 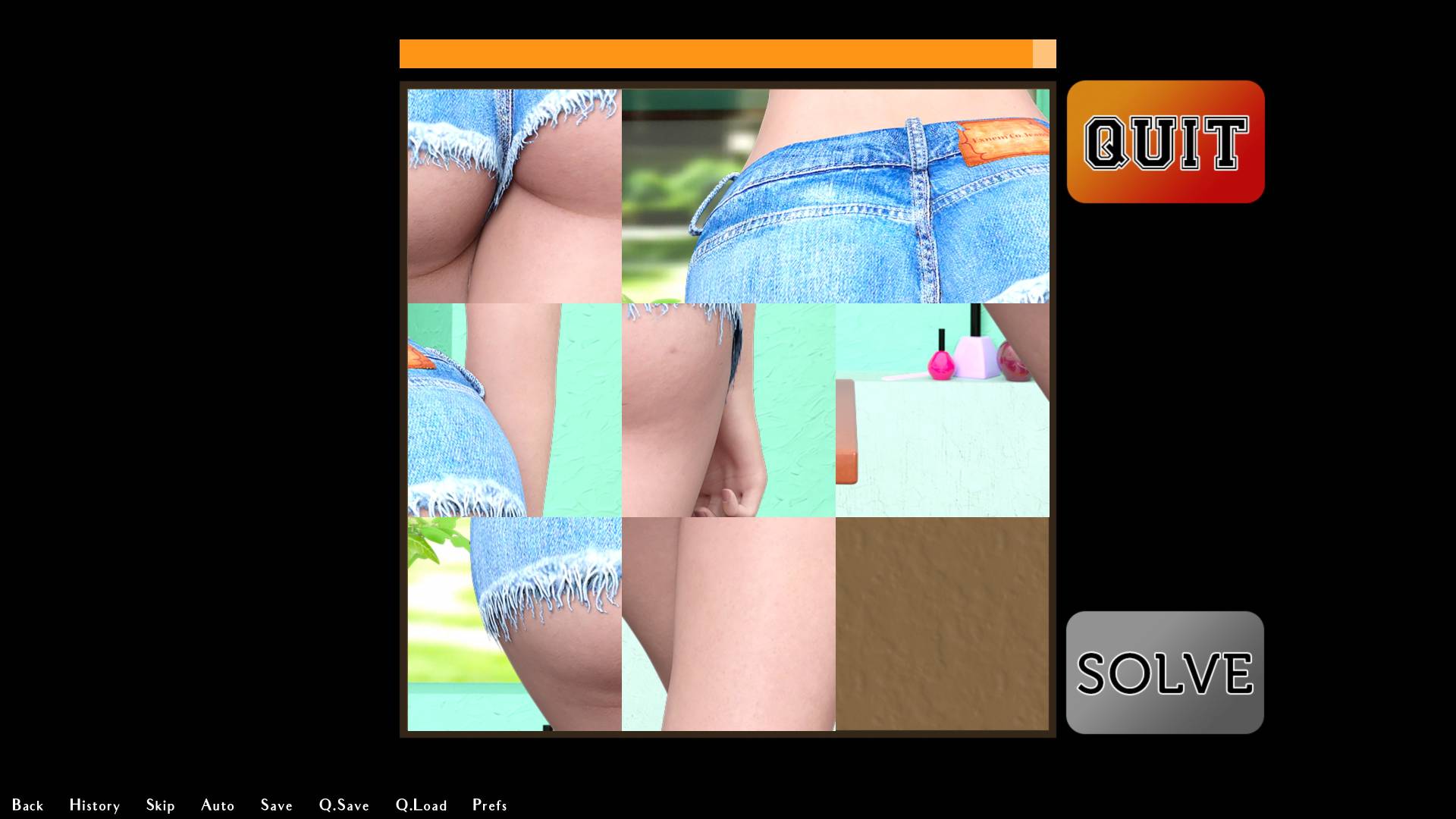 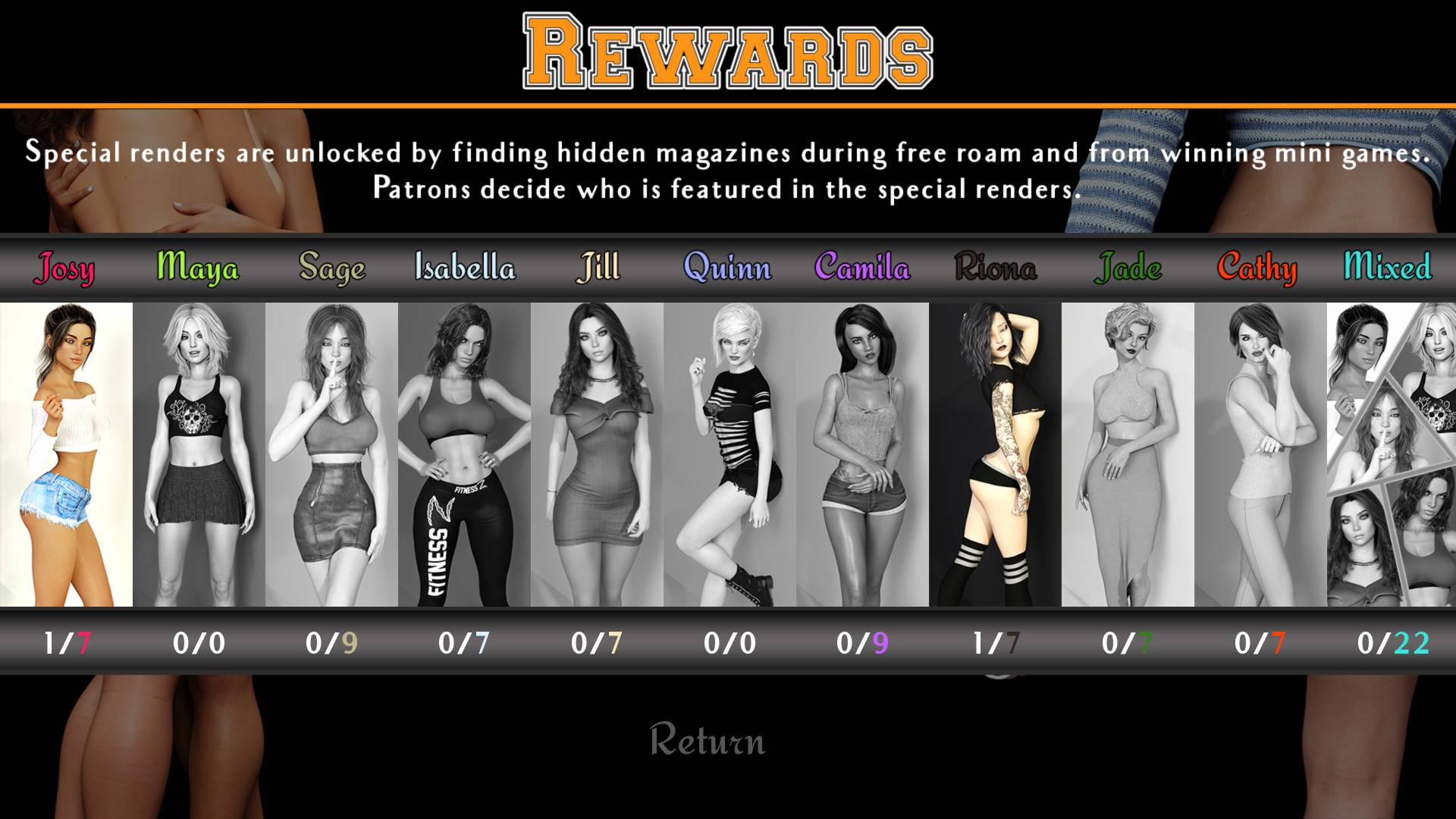 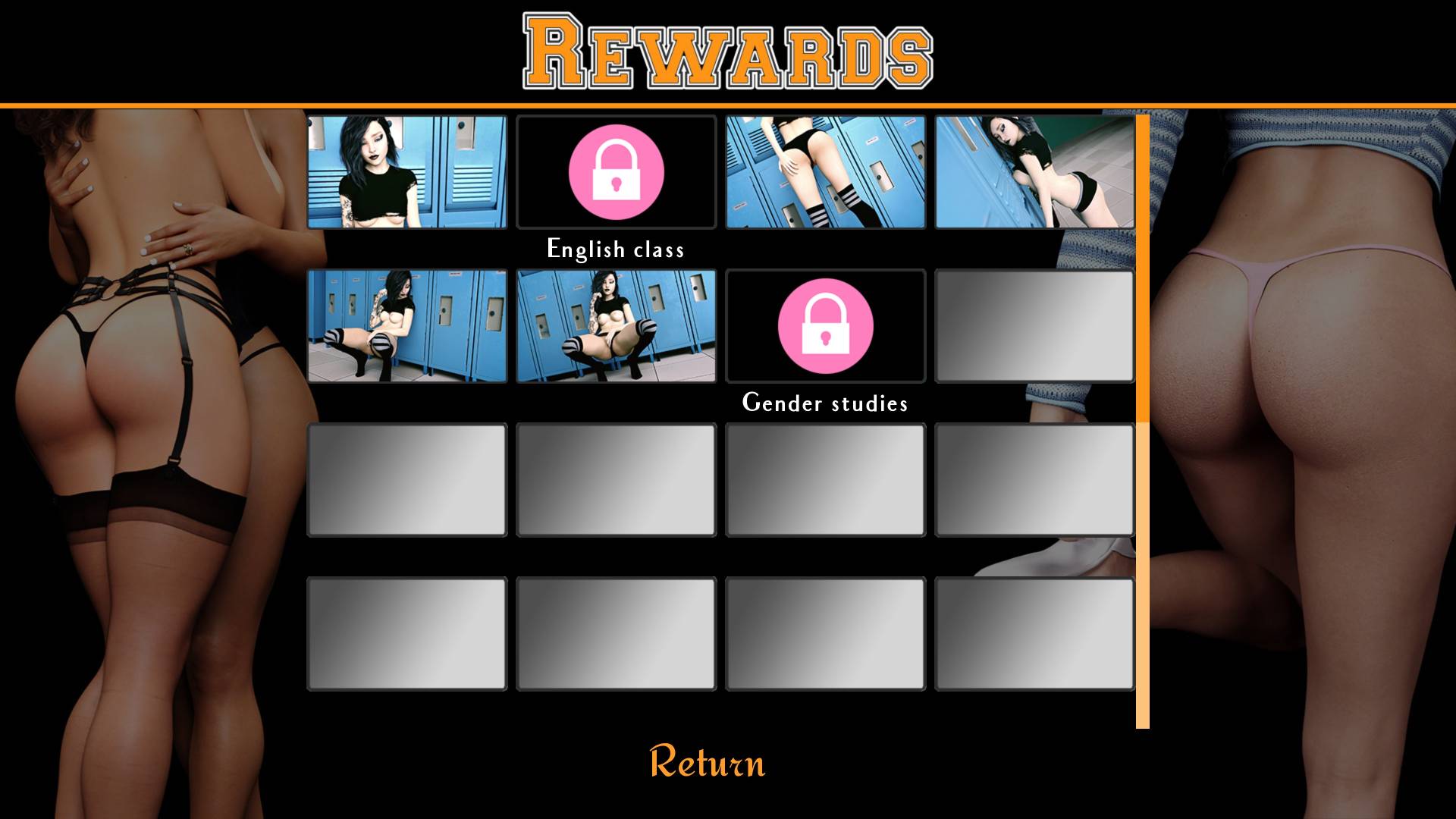 While this game takes some stances that I disagree with, it was still a lot of fun to play. Balancing relationships between all the available choices is exciting and requires a fair bit of thought. I'm definitely looking forward to the next chapter and how the story will continue. This is a raunchy disgusting game and I love it.

Danzig is your first room mate 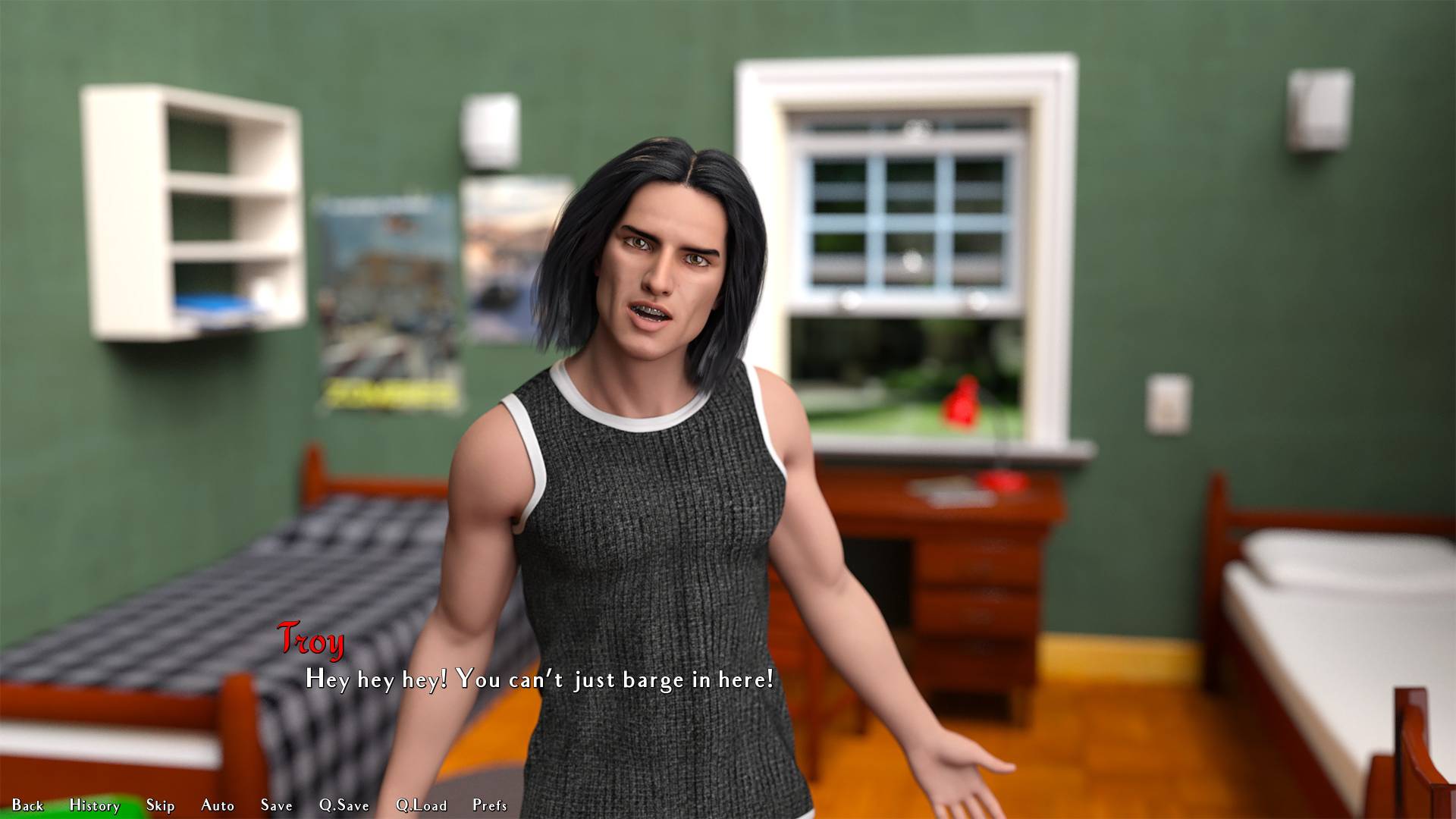 Sometimes the expressions can get a little weird. 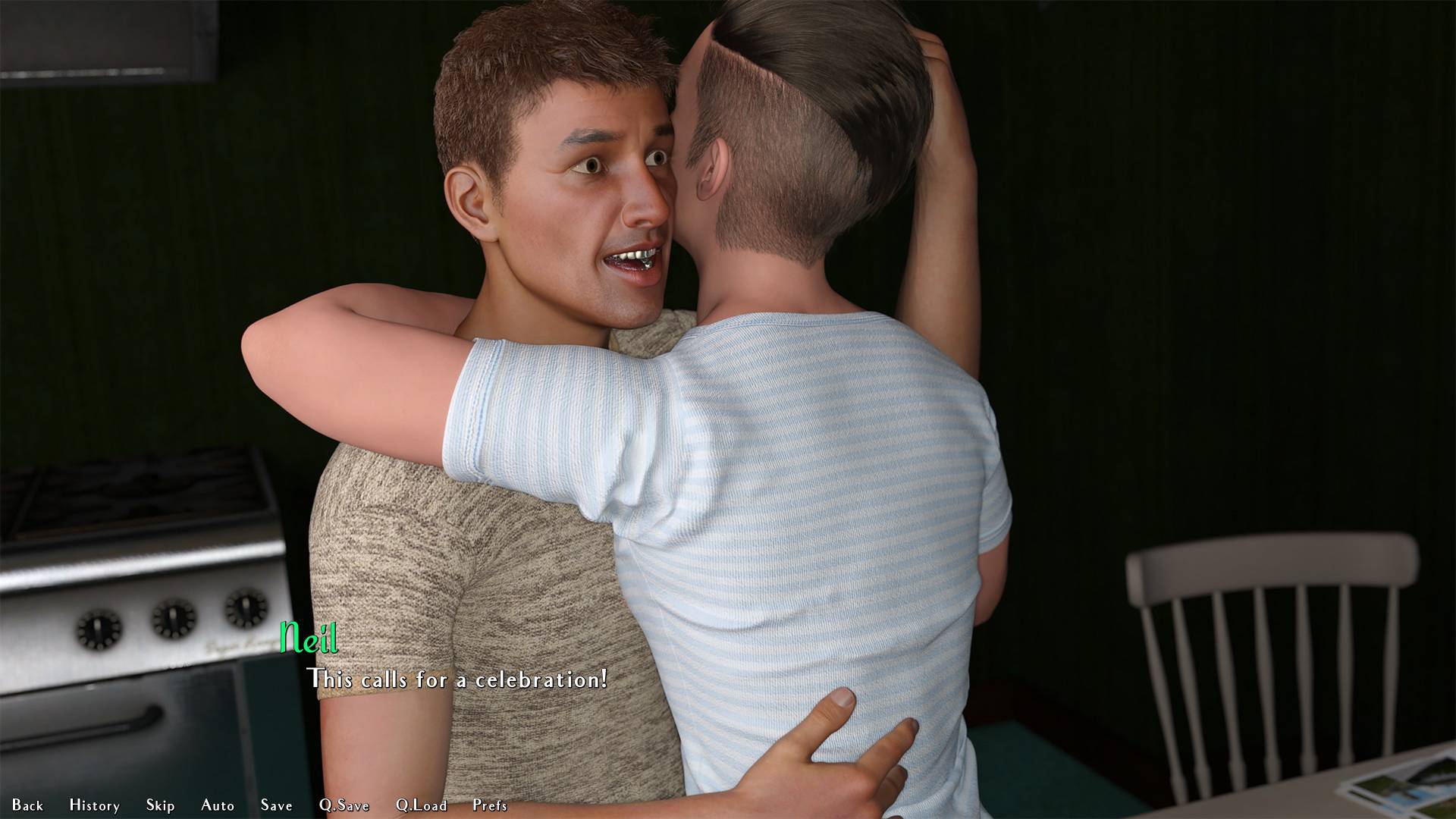 The weirdest thing in this game for me was having a loving and supporting dad who wants you to follow your dreams.