Gal*Gun 2 is a first person shooting game developed by INTI CREATES CO., LTD. and published by PQube Limited. It's available on Steam, Nintendo Switch, and PS4. For this review I played the Steam version, alternating between VR mode (an optional DLC) and normal mode. Despite being titled Gal*Gun 2, this is actually the 4th game in the series.

Terror! Demons have infested your school and are possessing the girls! Luckily an angel has come down from heaven and given you all the tools you need to save them. You have special goggles that let you see the demons, a vacuum to suck them up, and a pheromone gun. The only down side is that the goggles also make you irresistible to all women. Is that actually a problem though? You decide! 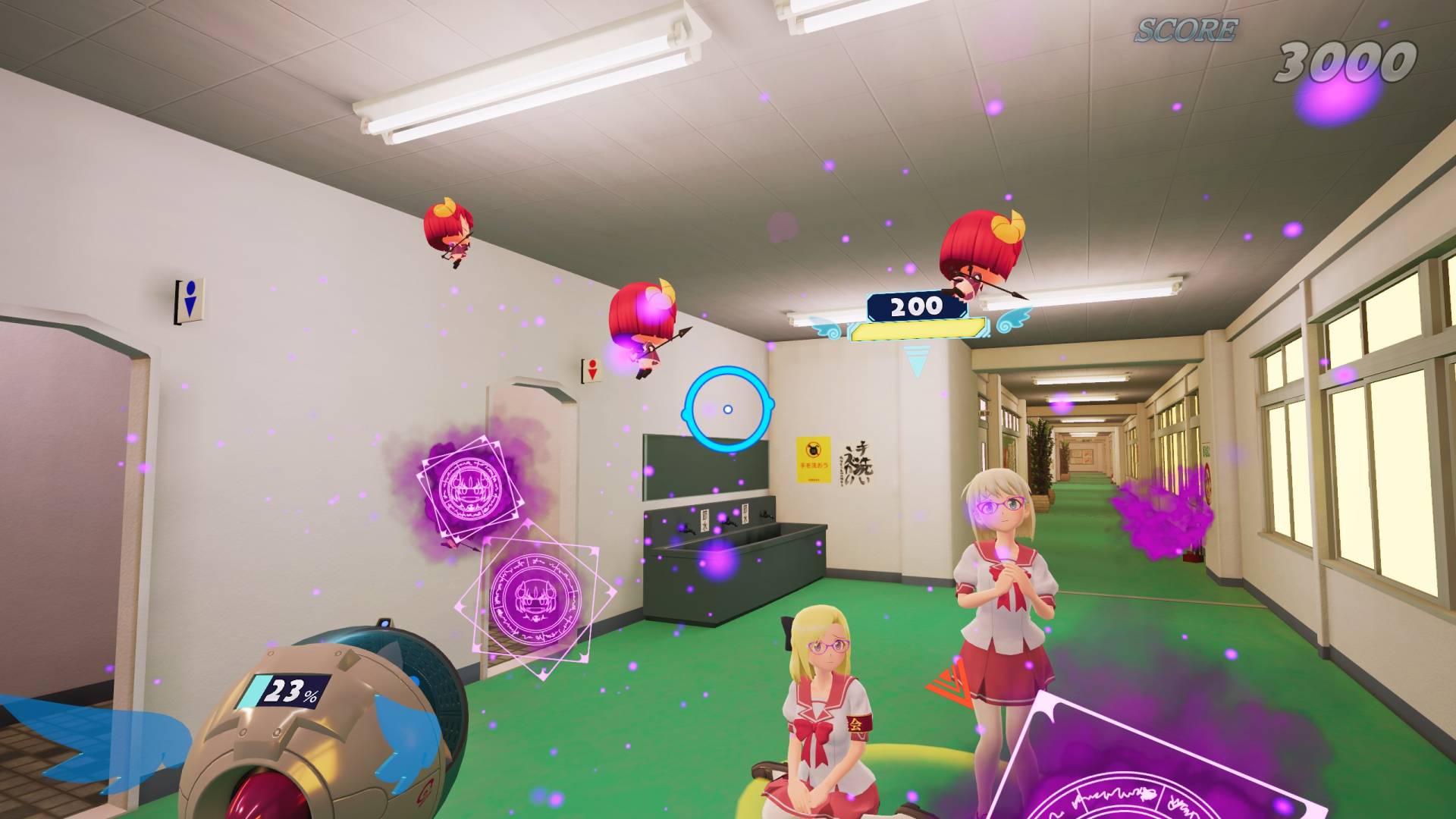 Risu is the angel assisting you, and Kurona is the fledgling demon responsible for the mayhem. You have only 2 weeks to reach your demon slaying quota, or Risu won't be able to get back into heaven. Sound arbitrary? That's because it is, but that's not the important thing here. The important thing is that they're all very cute. 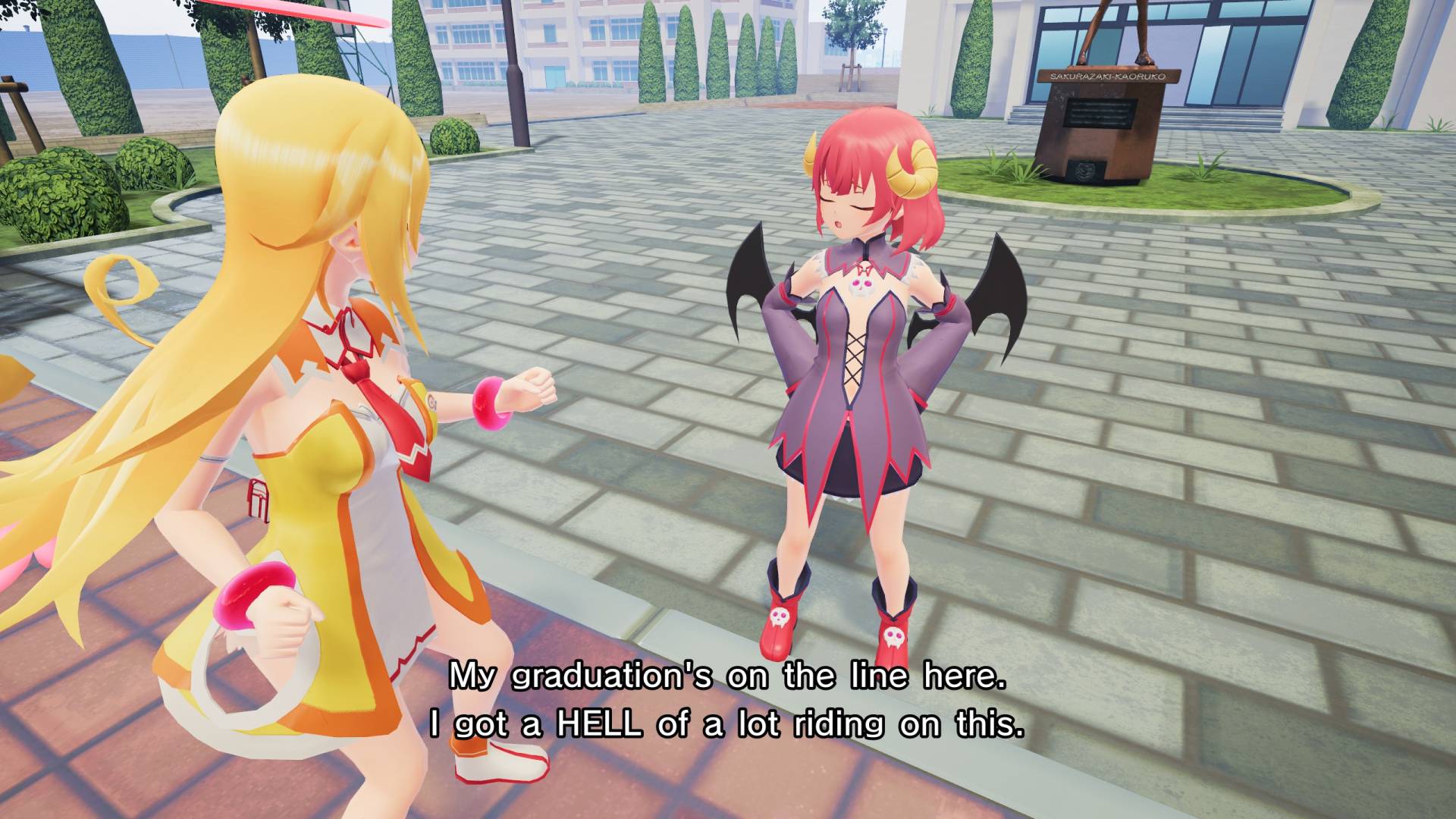 There are 4 types of shooting gameplay. The first is Standard, in which you move around a map and suck up as many demons as you can, while fending off attacks from girls. Girls will attack you by aggressively handing you confession letters, and pushing you down to kiss you. Posessed girls will be more violent and do things like slap you and step on you. The second mode is Defense mode, where you have a few stationary girls that you need to protect from demons that spawn in. The third are search missions, where you basically move around a limited map, fend off girls, and search for specific items, and boss battles, which are about what you'd expect. 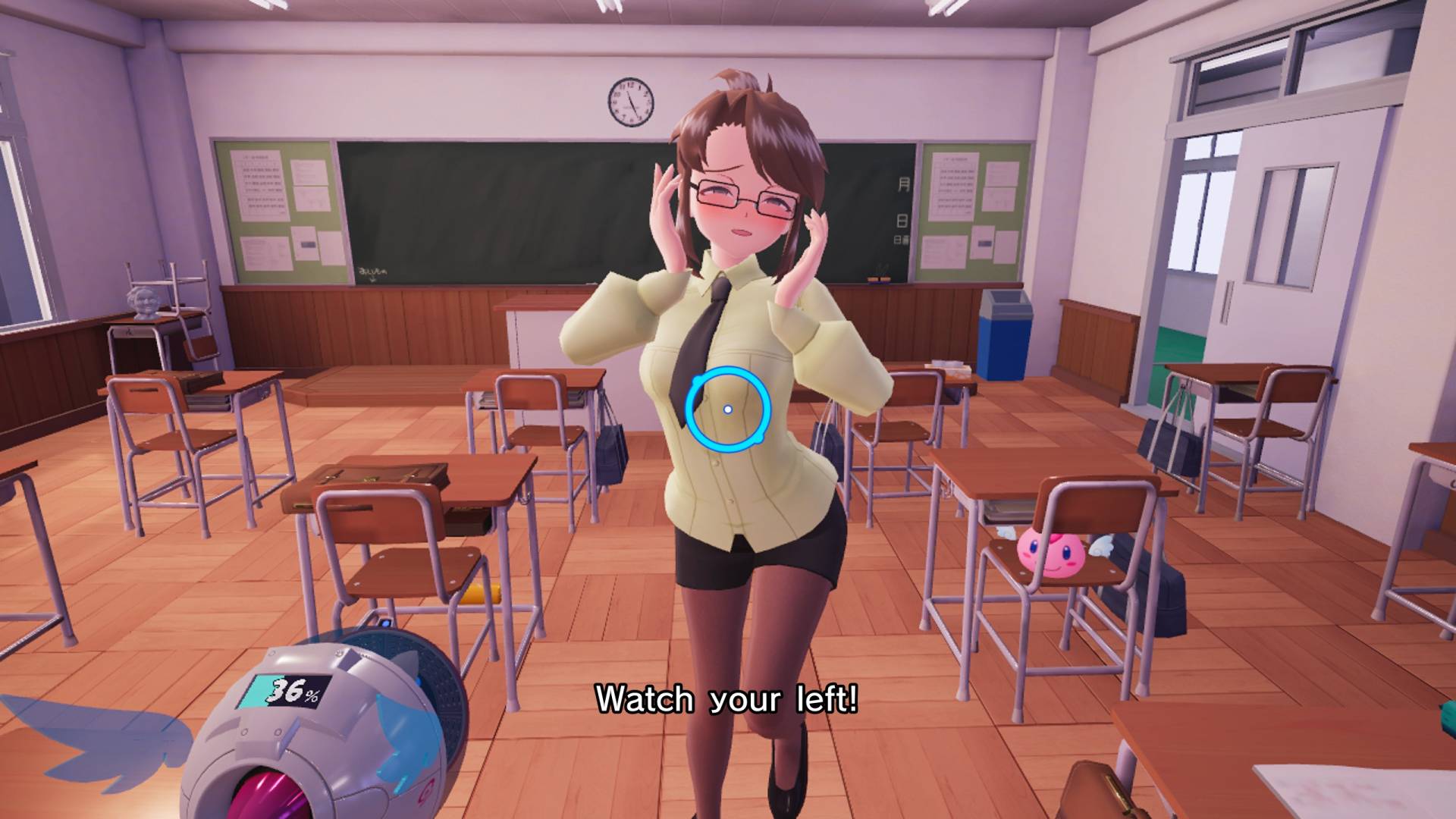 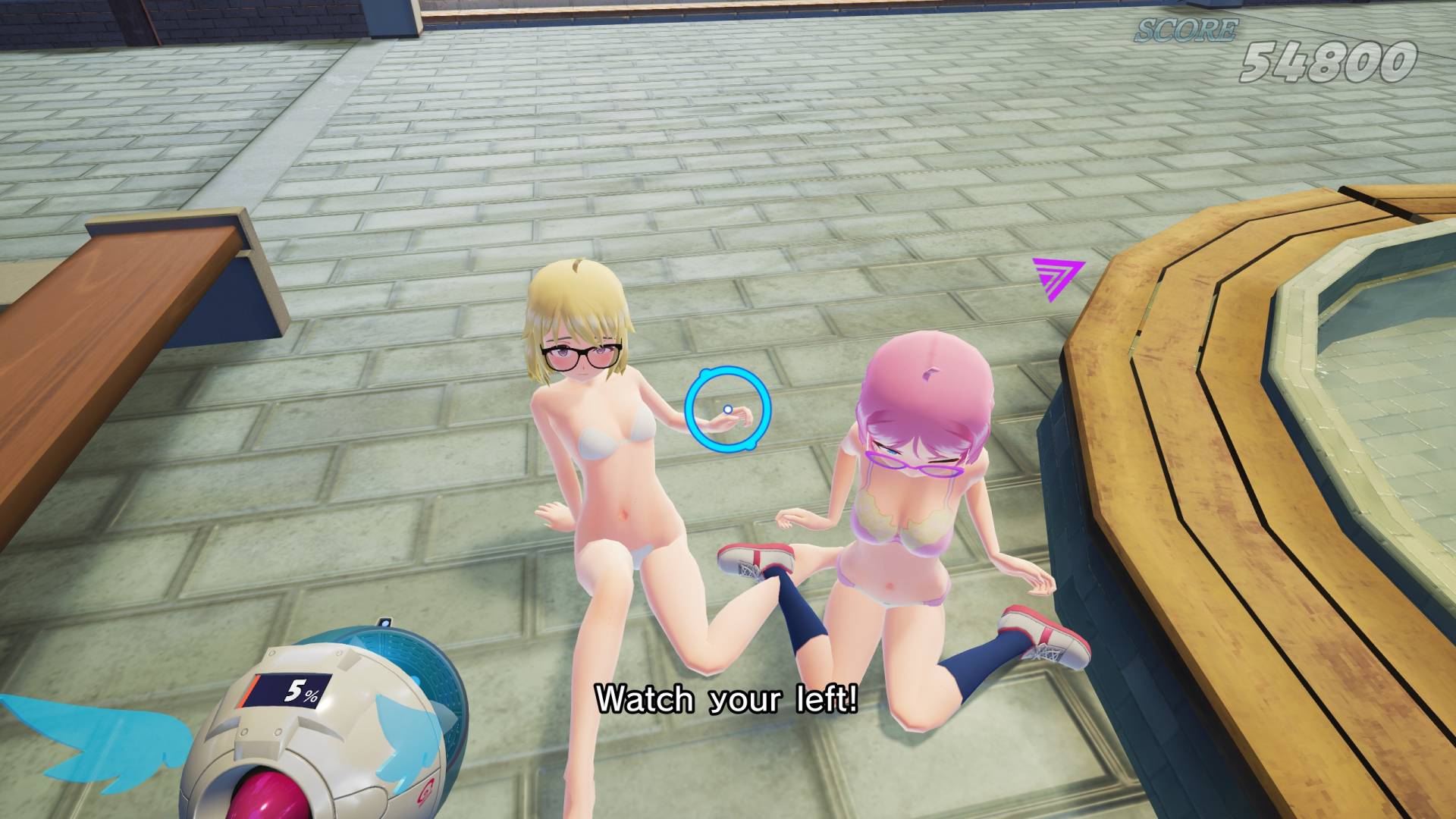 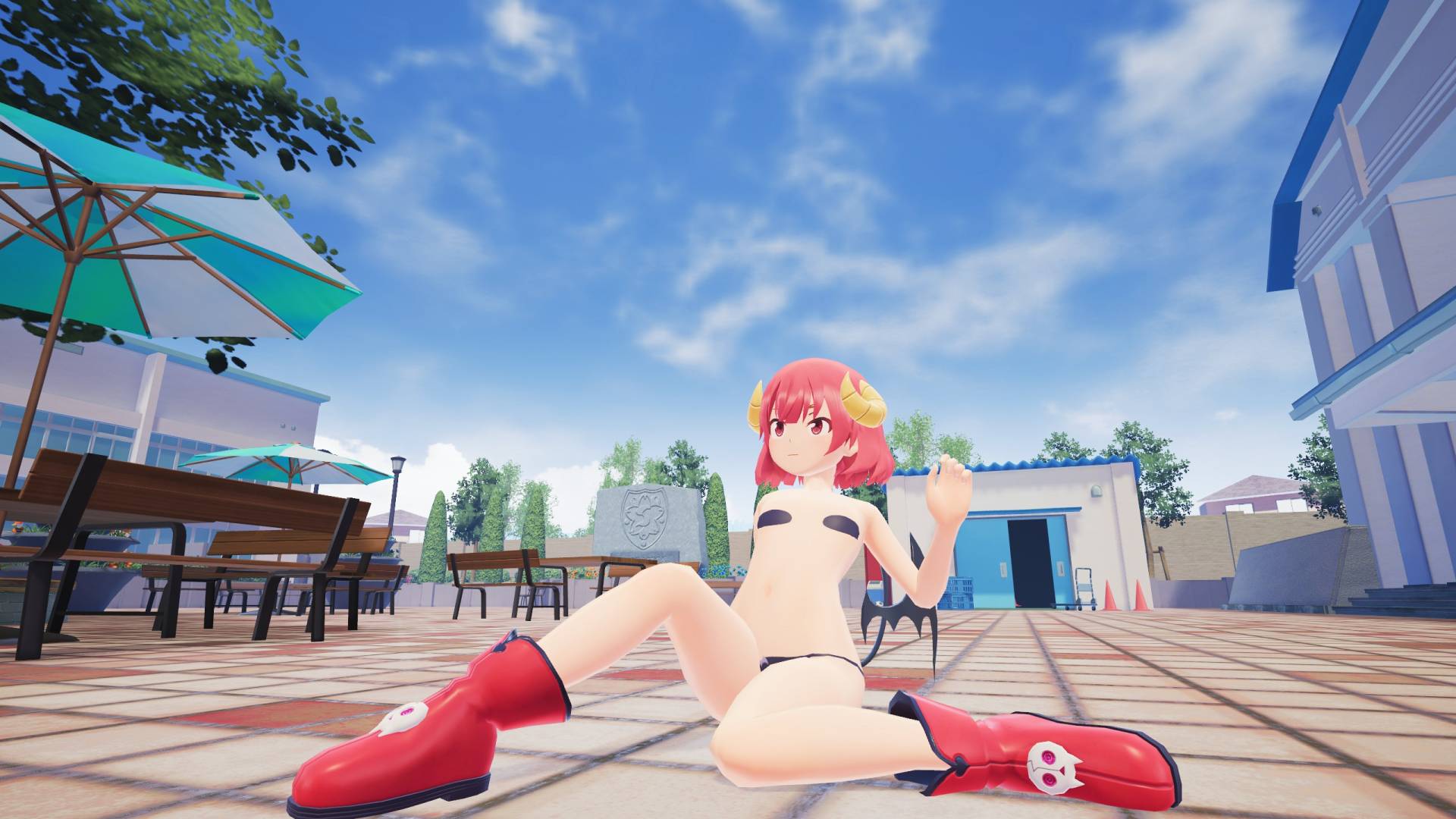 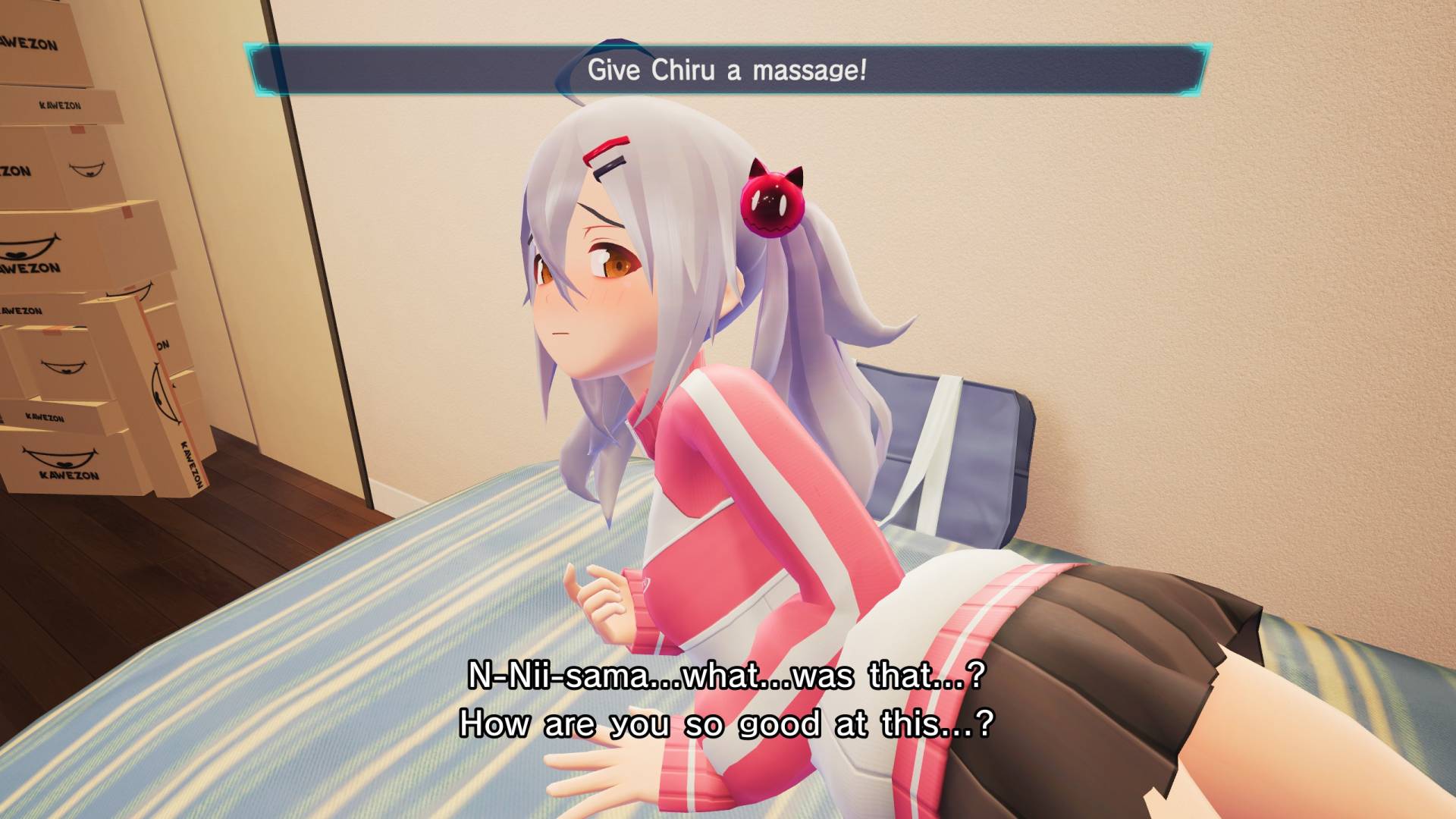 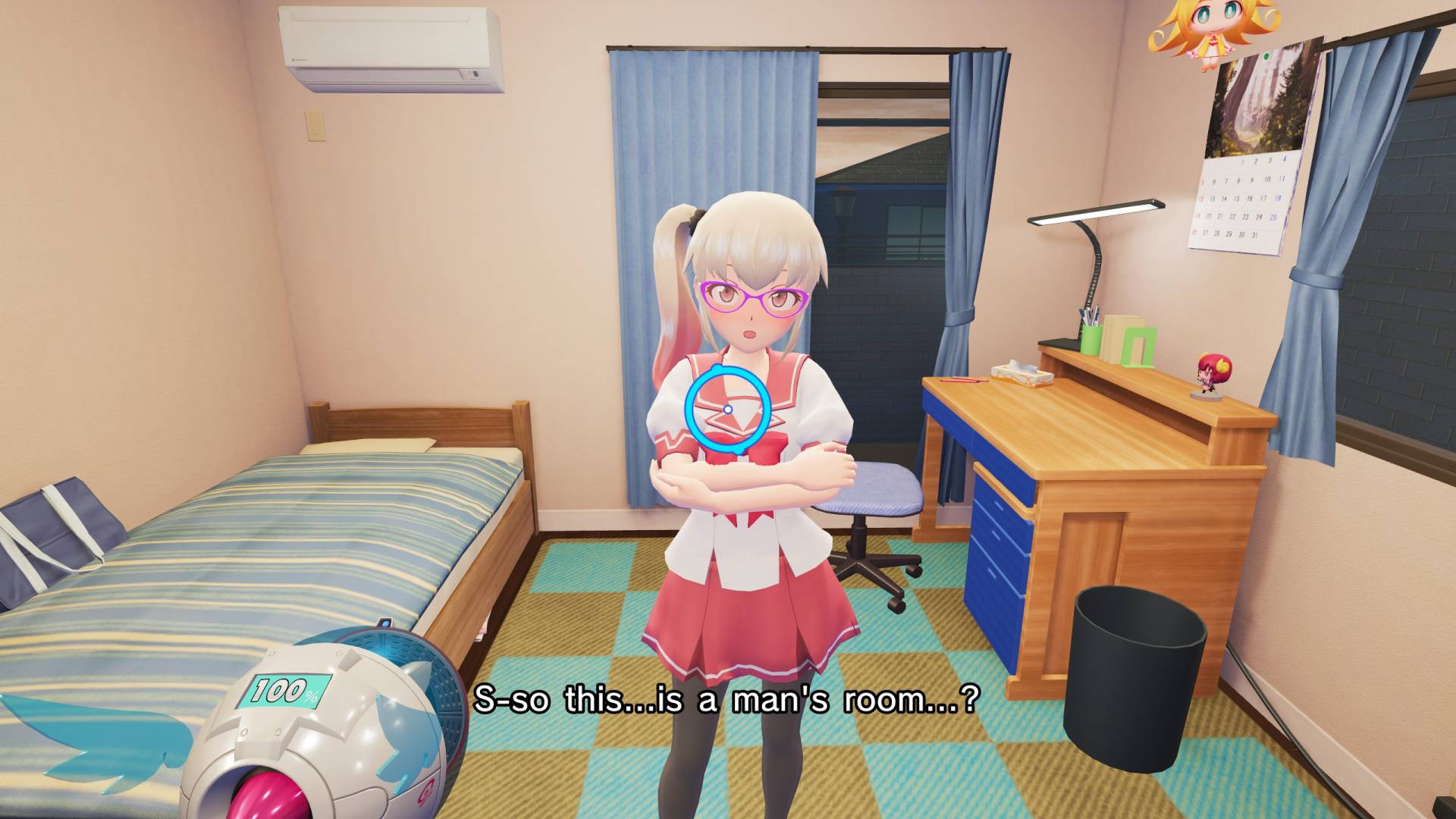 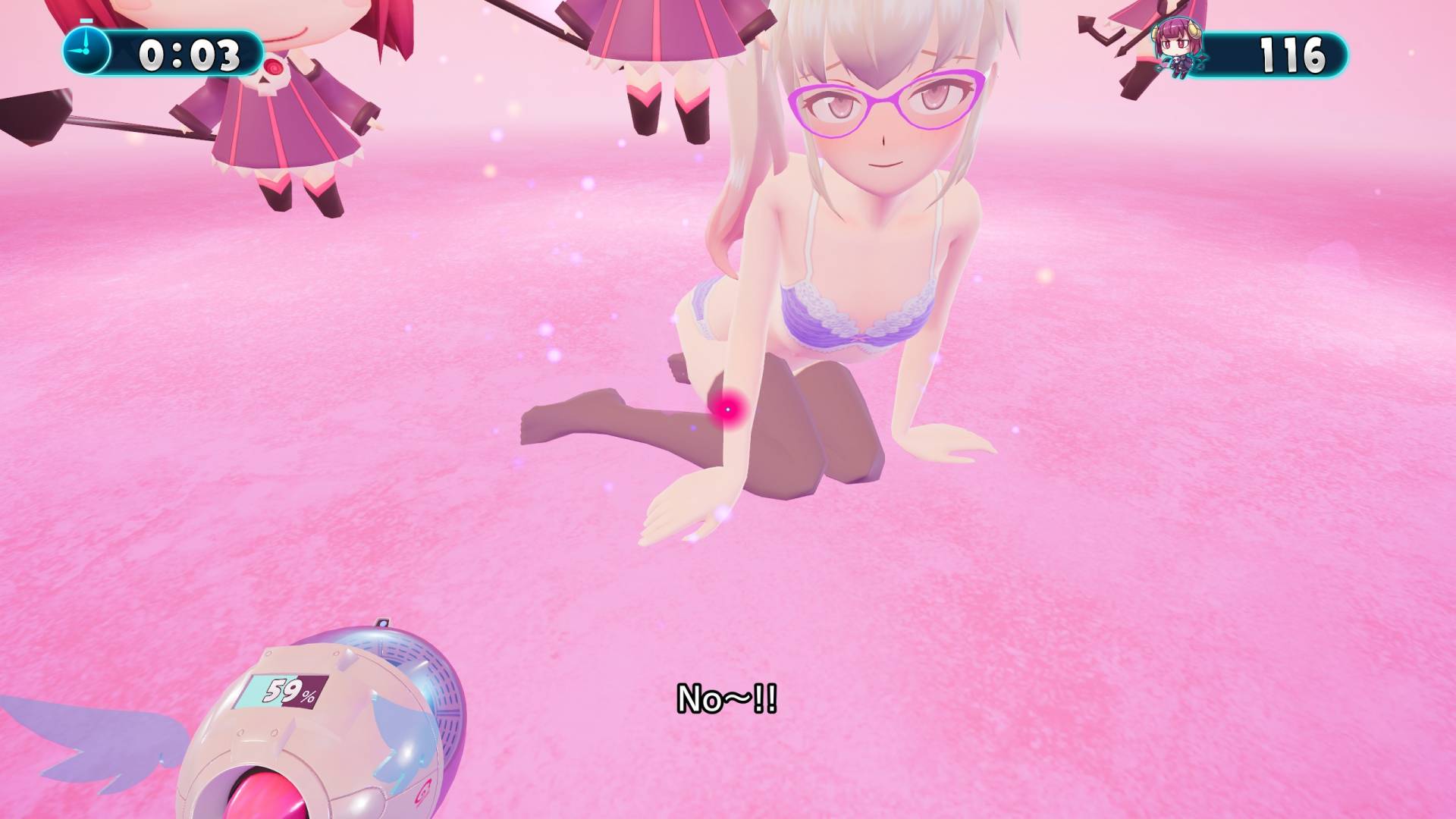 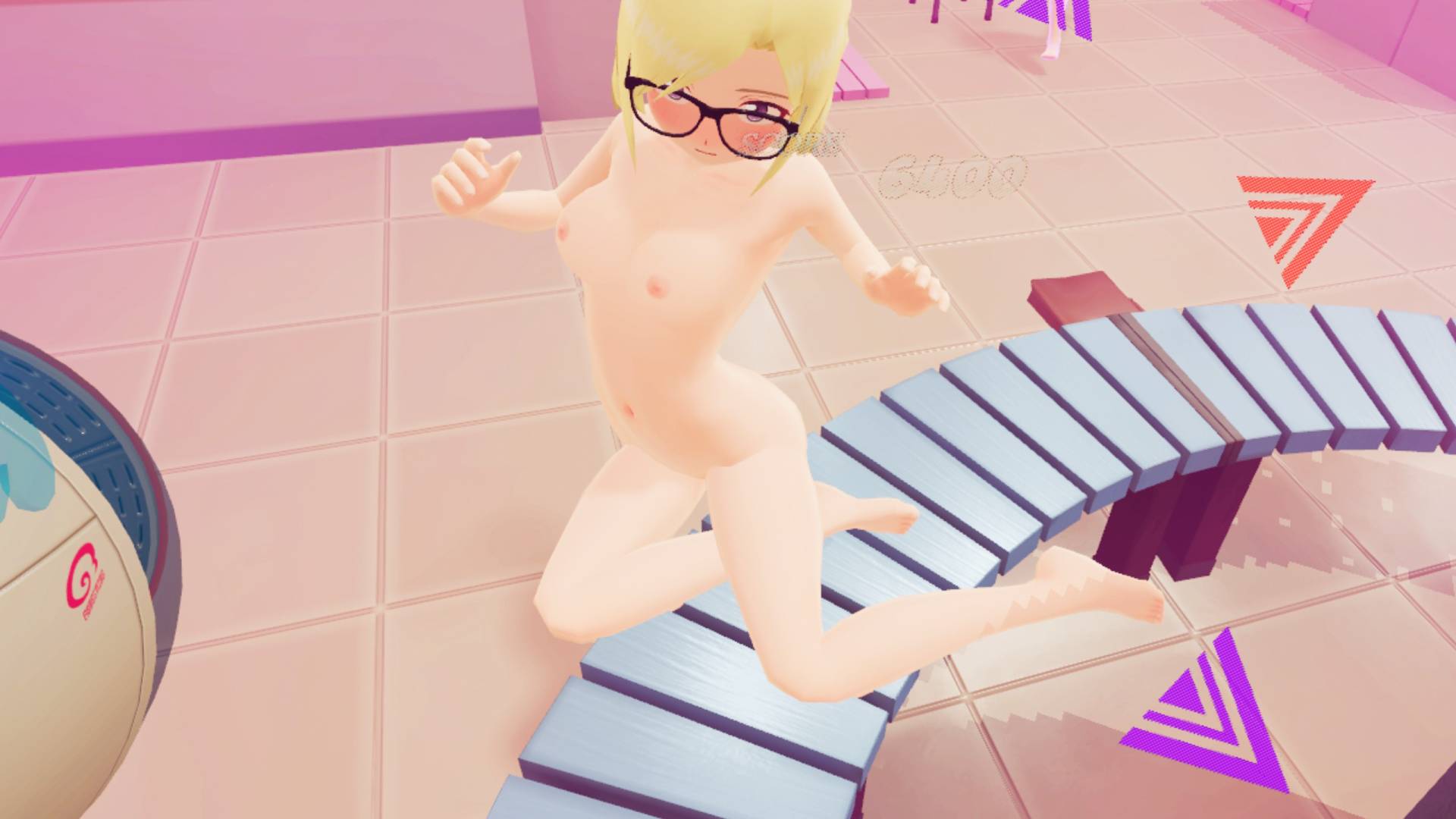 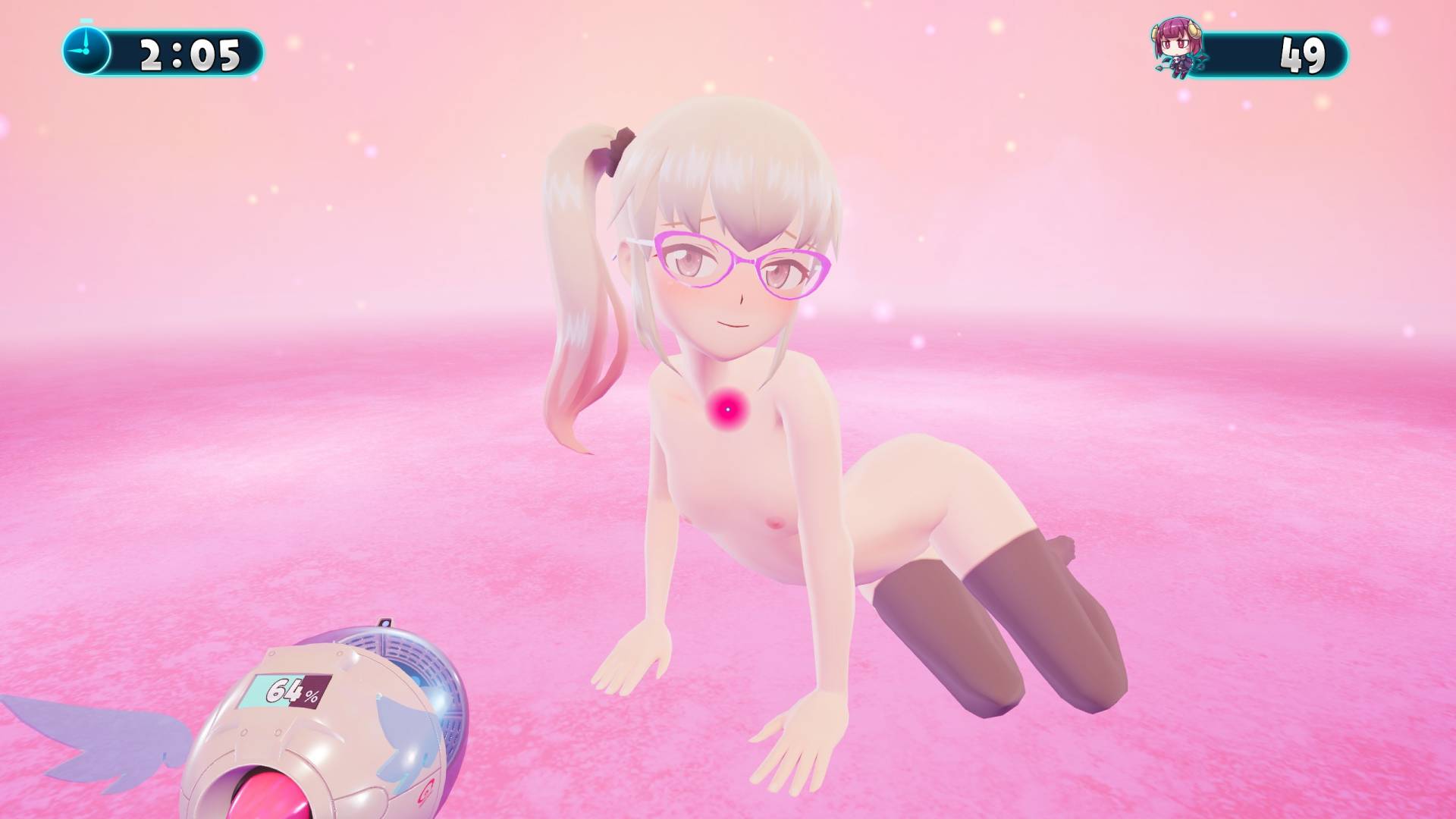 This is yet another one of those games that I expected to be kind of boring, but got really into it, even without the horniness. The characters are likeable, the gameplay is fun, and the story is a perfect mixture of silly and good. Add on top of that that the VR works very well and you have a great game.

When you unlock an ending, the game specifically tells you which one you've unlocked, and gives you the option to keep playing or jump straight to the ending. That's very respectful of my time, so I love it.

When I told my girlfriend that you garner affection with the girls in this game by giving them snacks, she offered the following comment: "same."

Even though this game seriously feels like it was made for VR, the mouse+keyboard mode works great too.