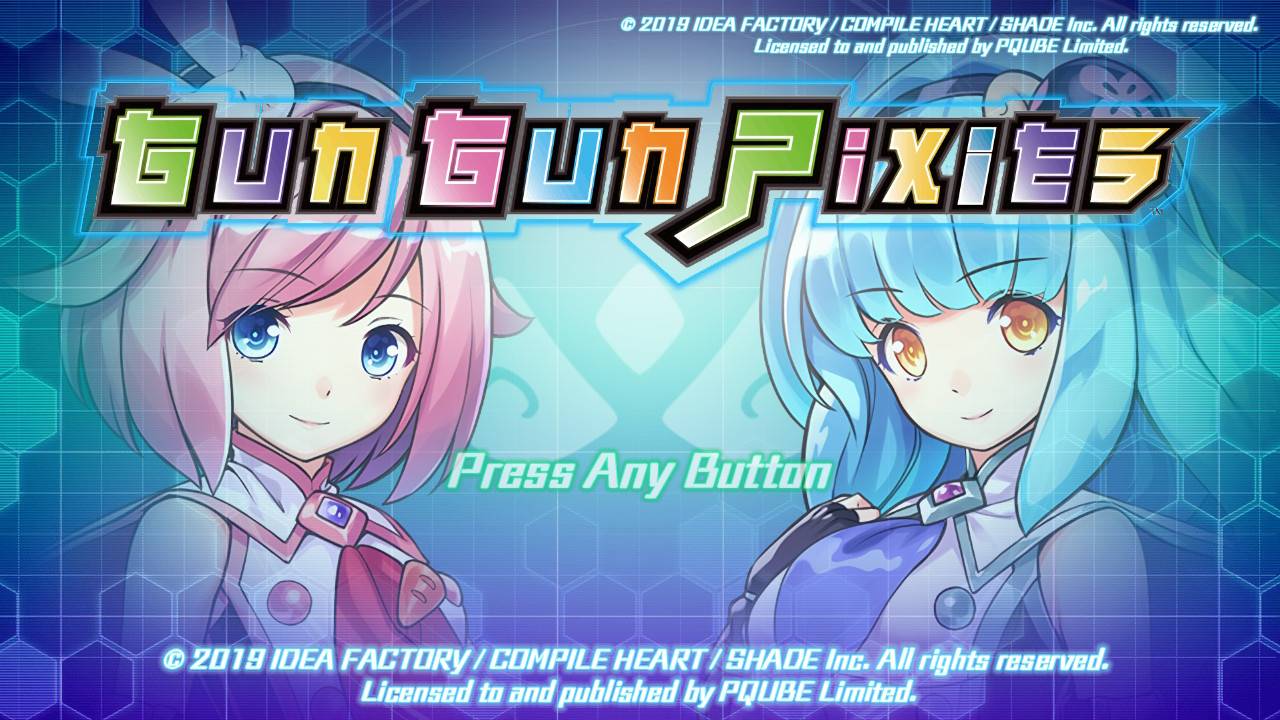 Bee-tan and Kame-pon are two cute aliens on a mission from Pandera to infiltrate an earth dorm, and study how humans live in order to bring that knowledge back to their home planet. Pandera is on the verge of destruction due to how self centered everyone has become, so figuring out how family and friendships on earth work could save everyone back home. Bee-tan is a happy-go-lucky out and proud lesbian who likes to enjoy the fun in life. Kame-pon is her inverse. Very duty driven and serious at all times. Both are only about 4 inches tall. They live secretly among the humans for 6 months, while helping solve some of their problems with 'Happy Bullets'.

As the story unfolds, our alien duo must also try and solve the mystery of the Phantom Thief, who is somehow stealing entire buildings Carmen San Diego style. How is this possible and what is the connection to the Lillypad Dorm where they're stationed? They certainly intend to find out. Along the way many of the girls in the dorm experience problems such as going overboard on a diet, taking their work too seriously, and dealing with lost friendships. Bee and Kame are there to secretly try and help them through it.

Besides the 'cutscenes' which like many games like this, are done VN style, the primary gameplay revolves around navigating large rooms, finding areas of interest, shooting "computer viruses" which take the shape of little squids wearing condoms on their heads, and squeezing information out of the girls in the room. All while avoiding detection. 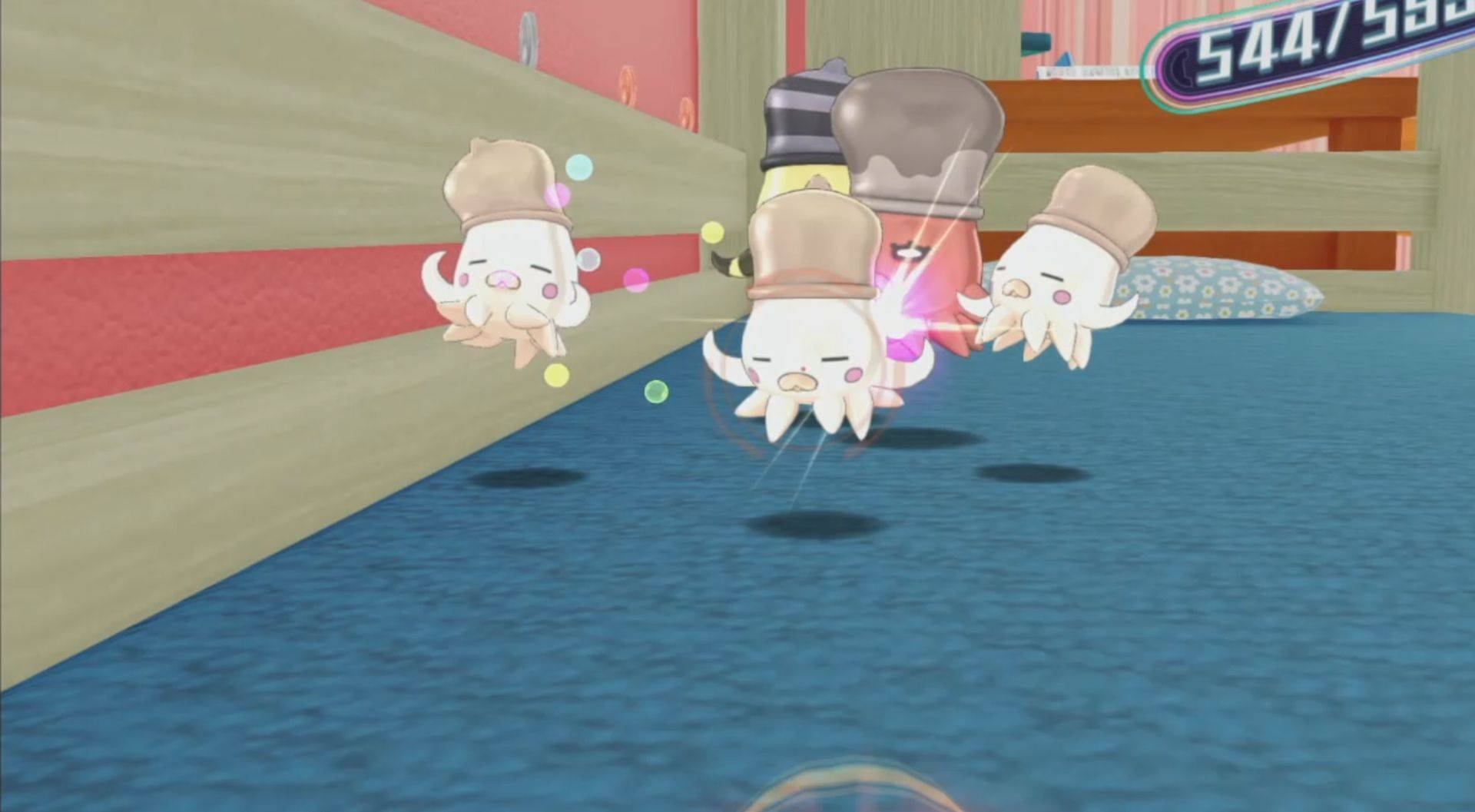 You can be detected either by entering the girl's cone of vision, or by making too much noise too close to them. If you do either, the game is over and you have to restart from the last save. This can get a little tedious but really doesn't happen much once you get the hang of the game. You can pose like an anime figuring to avoid physical detection, but this opens you up to attack from the viruses.

The end of each mission has a "Pacification" round. One of the girls is way too worked up about something, and may injure themselves if they don't calm down. You avoid projectiles they shoot while targeting various body parts until they're fully calm. 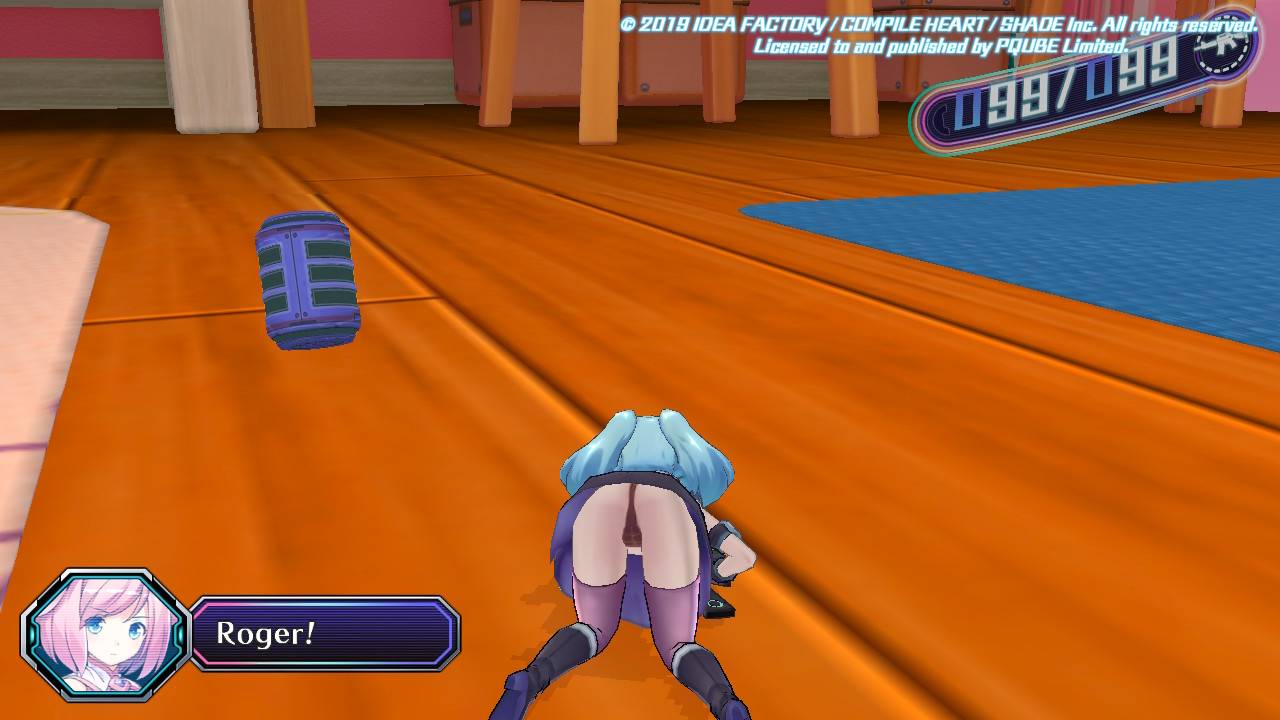 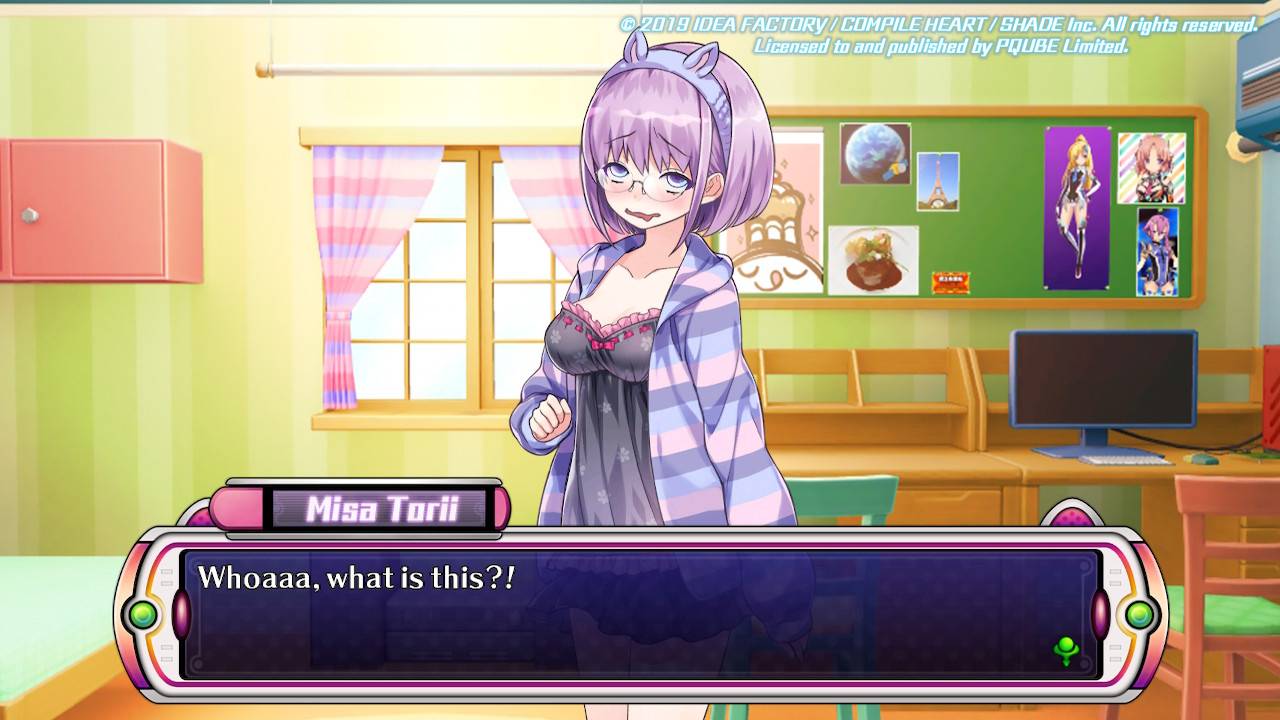 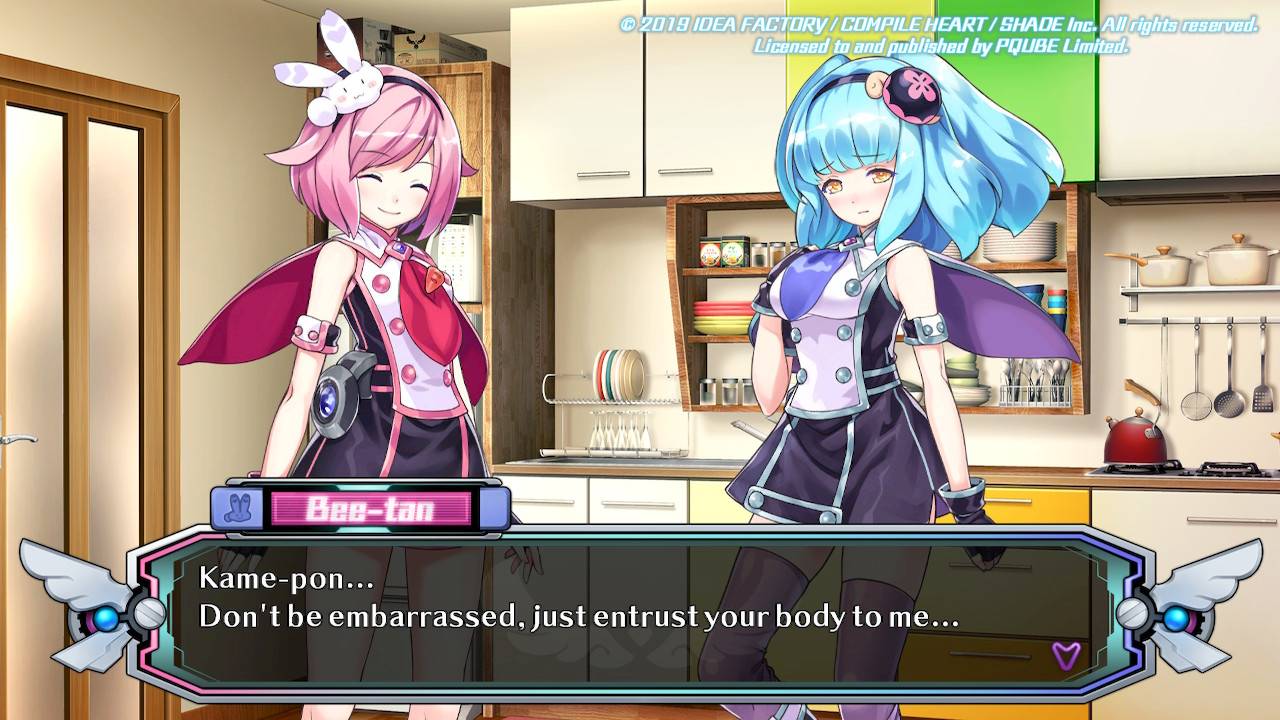 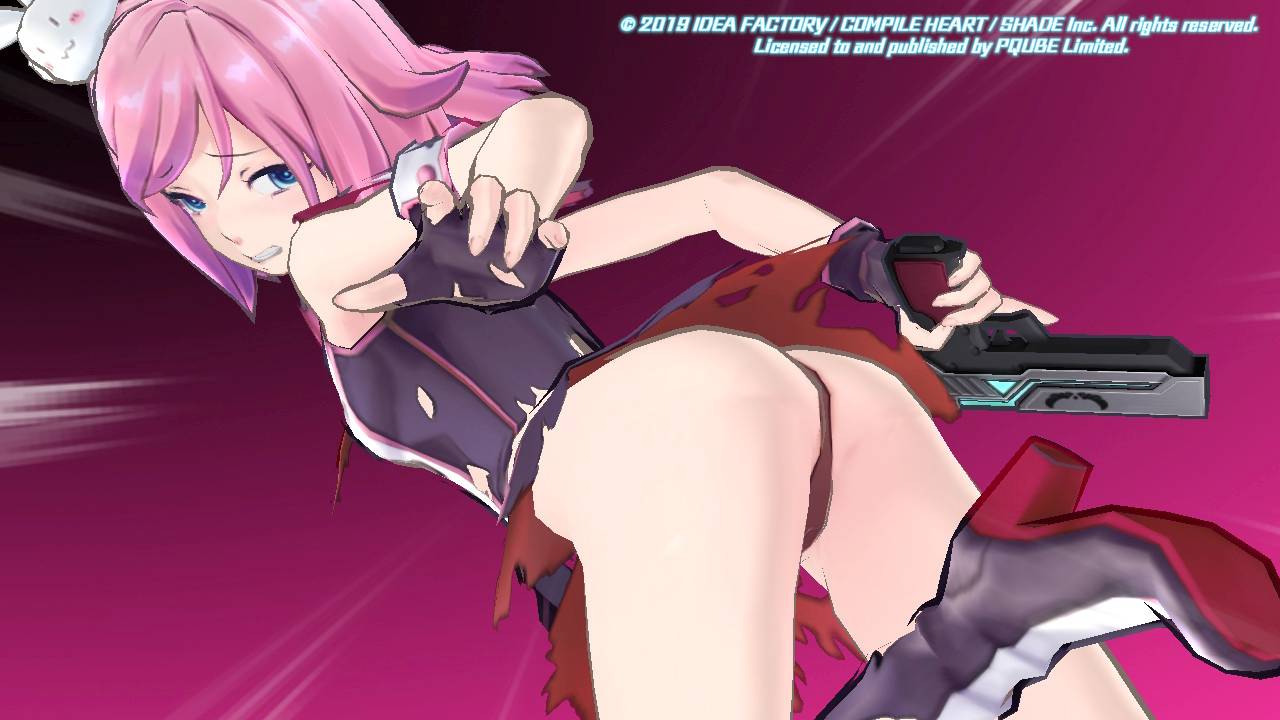 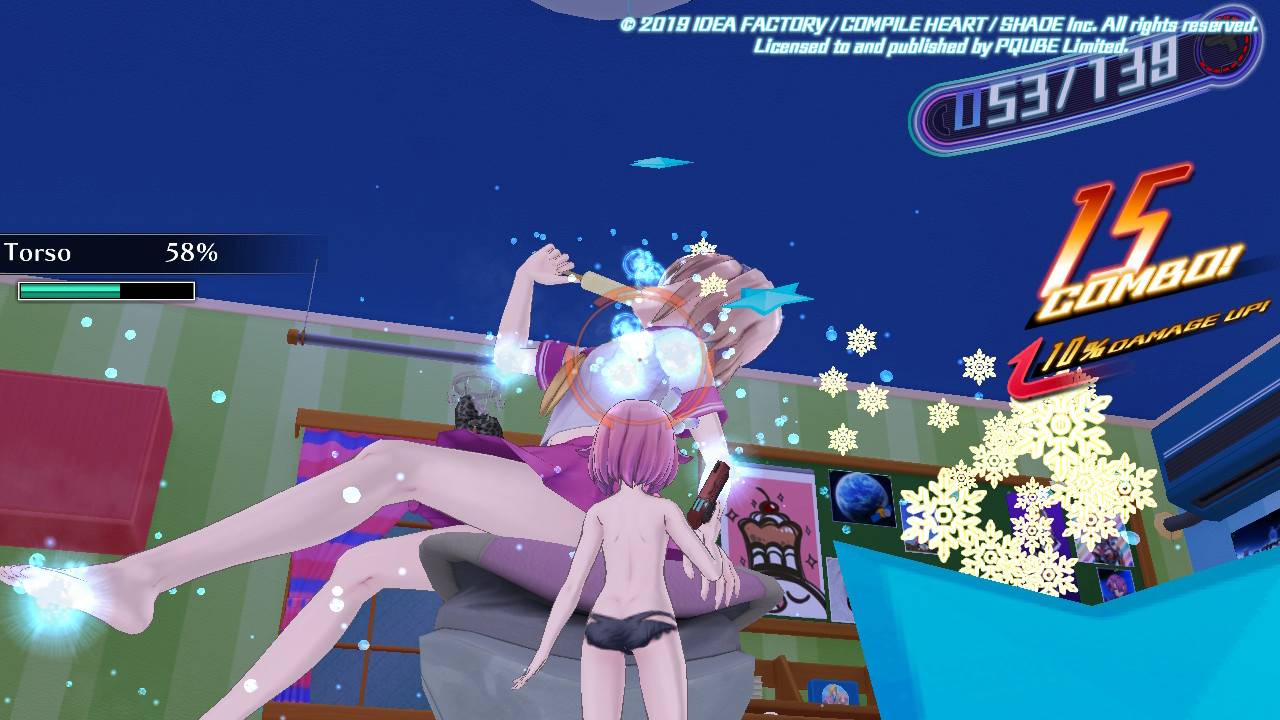 After a a pacification is complete, the girls take a bath to cool off. You decide to join them. When they get out of the tub for a bit, you can activate certain triggers to jump onto various parts of their bodies and hump them. I'm not sure how they magically remain unaware of the fact that there's tiny lesbians running around their house, but who am I to judge?

I think this is the first game I've played that had a canon genderfluid character. Things like that always make me happy. 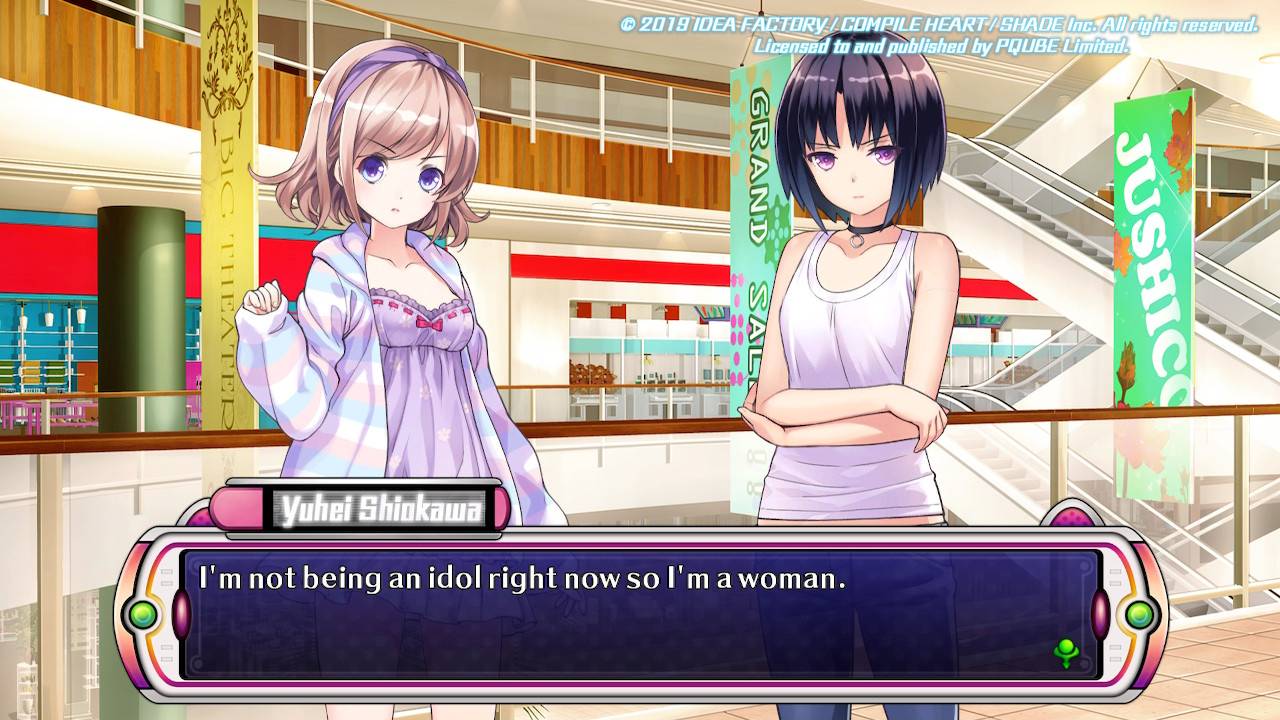 Though there are 2 cis male characters in Gun Gun Pixies, neither of them have character models, just portraits.

There's a 3do in this game for some reason. 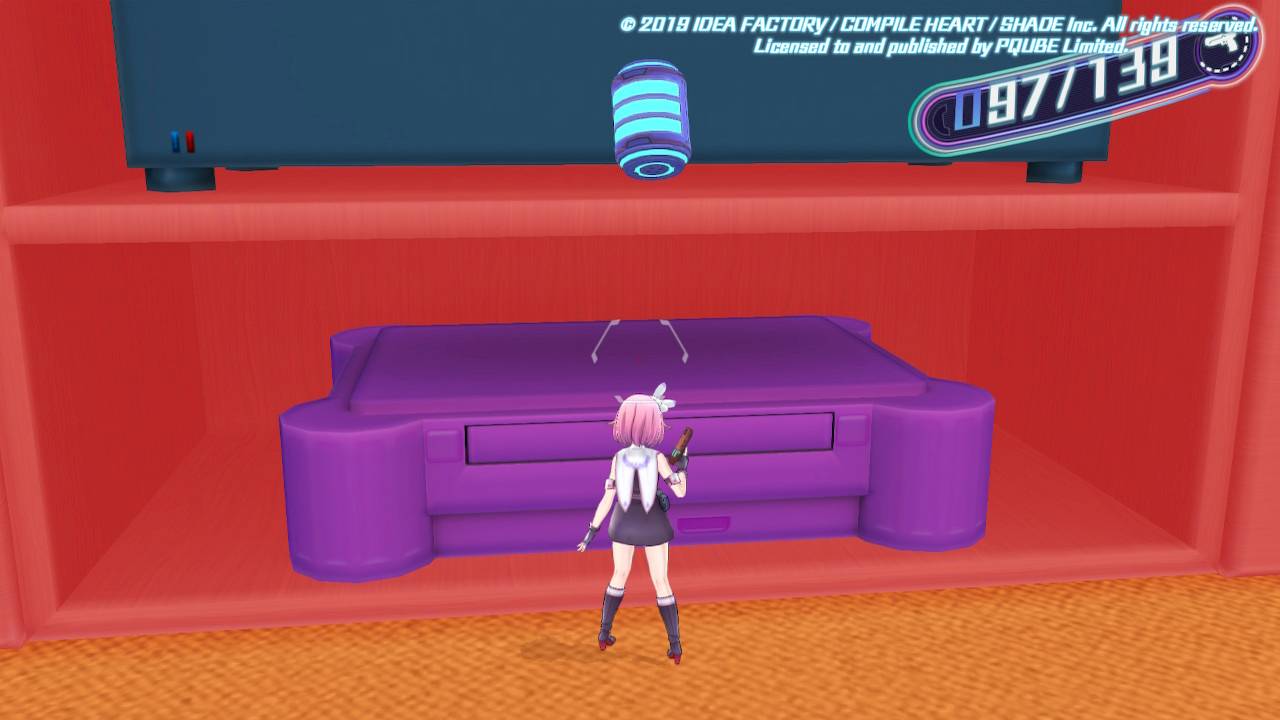 I really like the characters, story, and ideas of this game, but the gameplay is lacking.

There are only 3 maps you can go to, and often have to repeat them several times in a single mission. The missions that require you to just find the viruses to kill, wait for more to spawn, and then kill more are really boring, but are in the game a lot. It really hurts the pacing.

The controls for the platforming are really iffy. Executing a run-jump never felt right, and the characters would fall so fast that making a mistake in a platforming section would feel very frustrating.

If it weren't for the characters and story, this would be a negative review. But because the game is pretty short, the rough points are pretty tolerable.