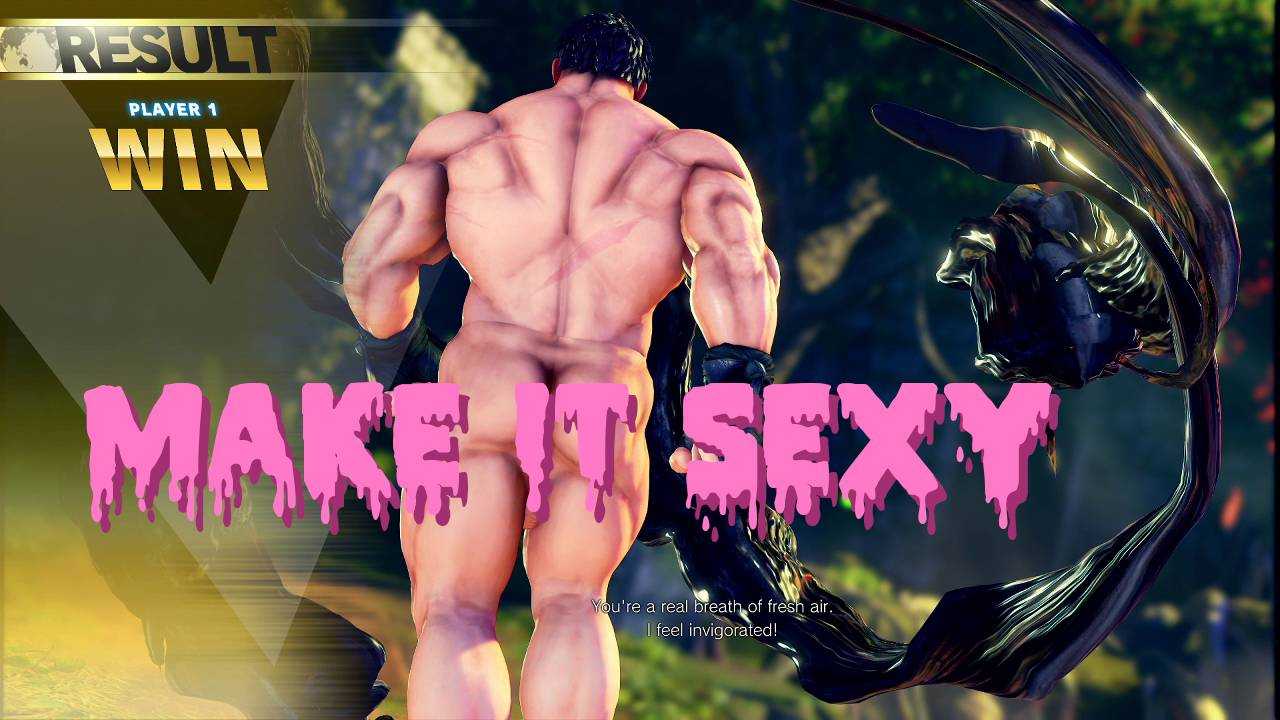 The Street Fighter series has some of the sexiest characters hands down. Pretty much regardless of what you're into, there's a character for you. My personal all-time favorite is of course, Laura, but really every character, male, female, and nonbinary are just... WAY sexy. So kick back, grab a hold of your fight stick, and join me on this journey of the SFV modding community.

All mods were found in this thread on Modder Base. While the files themselves are hosted all over mediafire, patreon, and deviantart. Not everything in it is still up to date, but it's a veritable wellspring of horniness. What I appreciate most about it is how supportive everyone in the thread is.

That's right, you read that title correctly. This game has NUDE MEN in it. And they are packing some serious HEAT. Seriously. Look at the images below and then compare to the nude male mods that were available for SFIV. No contest baby. All except one of the nude male mods where made by Aszrael. While I appreciate (really really appreciate) these mods, I wish the men had more mods like the ladies have. The ladies have nude, and also sexy skimpy slutty clothes. The guys just have... Dong. I'm happy to have it, I'm just saying I want more.

I'm only posting one example of Aszrael's work in this section, because you'll be seeing these dongs throughout this article.

This magnificent mod gives Abigail a dick that is in perfect proportion to his horrible mutant body. It was created by TerryXXX.

I should note, that if you install Aszrael's nude abigail mod alongside this one there are some... interesting side effects.

Believe it or not I actually wasn't able to find a straight up Sakura nude mod. But I found the next best thing! This bathing suit was made by Brutalace

Reminds me of this:

Sometimes a straight up nude mod can get pretty boring. Somtimes it's more fun when you leave a little to the imagination! Well KrizmKazm has us covered with their suggestive, but non-nude skins for Laura and Juri.

Just like any good game, the number of SFV nude and lewd mods is vast. Here are a few more that I installed and enjoyed, but don't really cover anything I haven't already talked about.

This was a lot of fun. Street Fighter V is one of my favorite games, and since Championship edition came out it's been nothing but fun to look through all the mods. The fact that there are dong-monster skins for just about every character makes me really happy. This is definitely a game I may revisit down the line when new mods come out. Maybe it'll be an annual article. Who knows.